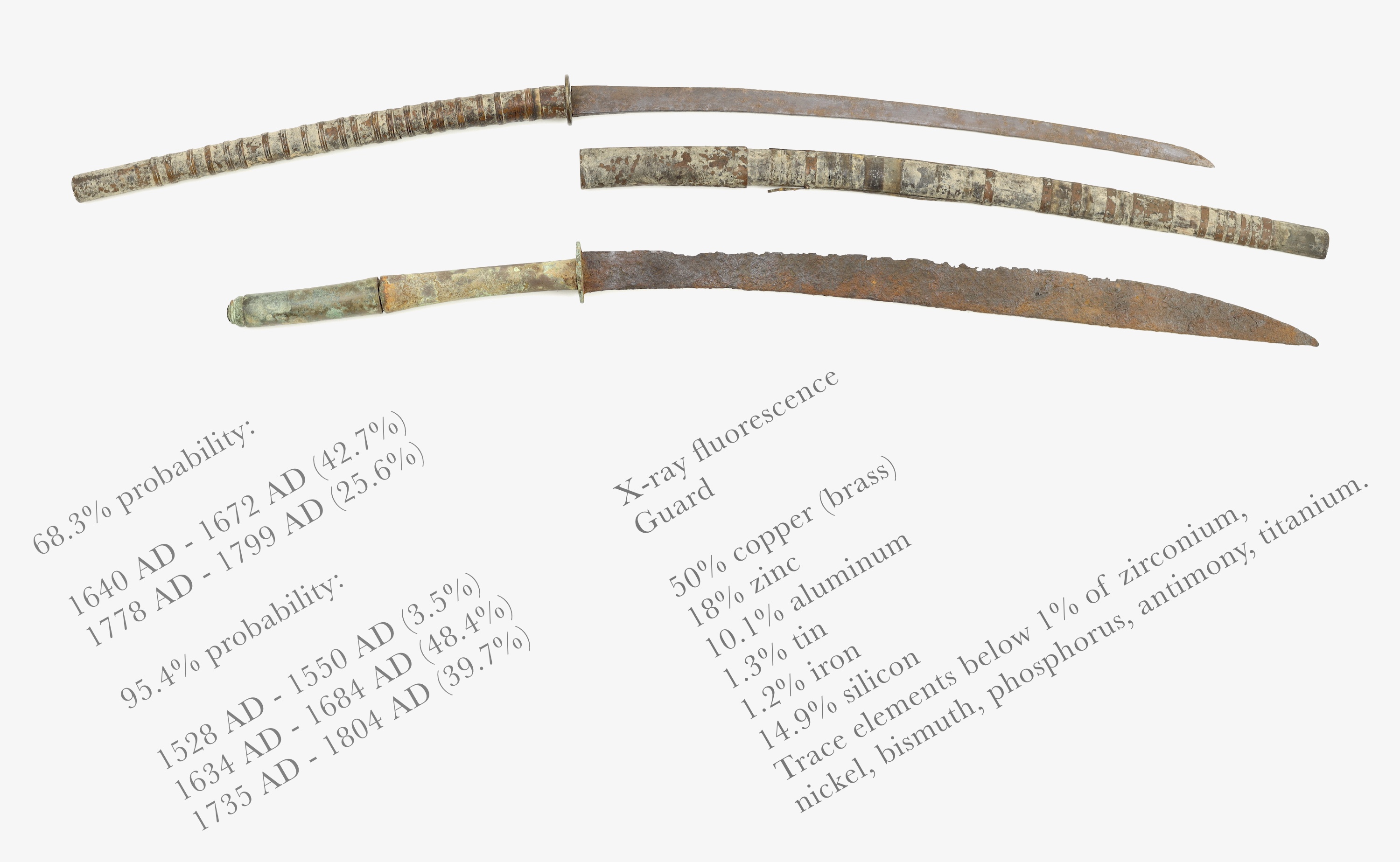 Among the swords of mainland Southeast Asia that are circulating between dealers and collectors is a group of old swords in excavated condition. Styles within this group vary, and they appear to represent different time periods and cultures.

Little is known about them. Some of them are identified as from the Khmer empire of  802-1431 AD, while a group of swords in the History Museum, Hue, Central Vietnam are dated to the Tây Sơn dynasty of 1778–1802 AD.

These pieces are of generally low value, too low to justify thorough research from a commercial perspective, but sometimes I need to let passion and curiosity reign. It's why I got into this business in the first place! So when I had two in my possession I decided to run some scientific analysis on them to see if we can find out more.

The research conducted consisted of X-ray fluorescence (XRF) and radiocarbon dating of fragments of wood.

XRF is a non-destructive method to determine the composition of a material by exposing it to high-energy gamma rays, after which it briefly emits fluorescent X-rays peculiar to each element. Older materials are not as homogenous as modern materials, so you can expect to get a slightly different reading at each spot of a single piece. Also, it tests the surface which may give different results from the core. Silicon for example typically binds to the metal when pieces are in soil for some time, while not originally present in the alloy. Elements lighter than magnesium cannot be measured using XRF, so unfortunately it cannot detect the levels of carbon in the iron.

I will present the data pretty much as I got it, hoping it will serve the researching and collecting community. I'd be happy to learn about any observations a reader may make from them.

It is interesting to see how much the composition of the alloys differs per piece, indicating perhaps a production line where different parts came from different batches or sources. The somewhat erratic compositions are also indicative of traditional manufacture. Modern materials tend to be more homogenous in composition.

A piece of old wood deep into the guard side hilt sleeve was prepared for carbon dating. It gave the following results:

There is one caveat, the dating is based on a sliver of wood that was lodged inside the hilt. Hilts break and their wood can be replaced at later times.

A small hole was drilled in the hilt of this sword, pommel side, and wood was extracted from it. We made sure only core wood was taken, the material near the exposed surface was discarded. It gave the following results:

From the above, we can conclude that the piece is most likely from the 17th or 18th century, with a very slight chance it is from the early 16th century.

Interesting results from two specimens. I hope the results help fellow researchers and enthusiasts in their further study of older Southeast Asian swords.

One peculiar aspect about the group of swords that this piece belongs to is that all are found in excavated condition, while these two examples are old but not particularly ancient.

Possible explanations, they were deliberately buried:
-With the intent to further age them.
-To hide them from authorities, like the Khmer Rouge in Cambodia who would have surely confiscated them.
-As part of a religious rite or custom.

And of course, we can't simply rule out plain neglect and/or a natural event. Deterioration like this can go quite fast in the hot and humid regional climate. I hope more information will surface to narrow down the possibilities.

Don't hesitate to get in touch. I'm looking forward to hearing your thoughts and comments.

In excavated condition. With XRF and radiocarbon dating results.