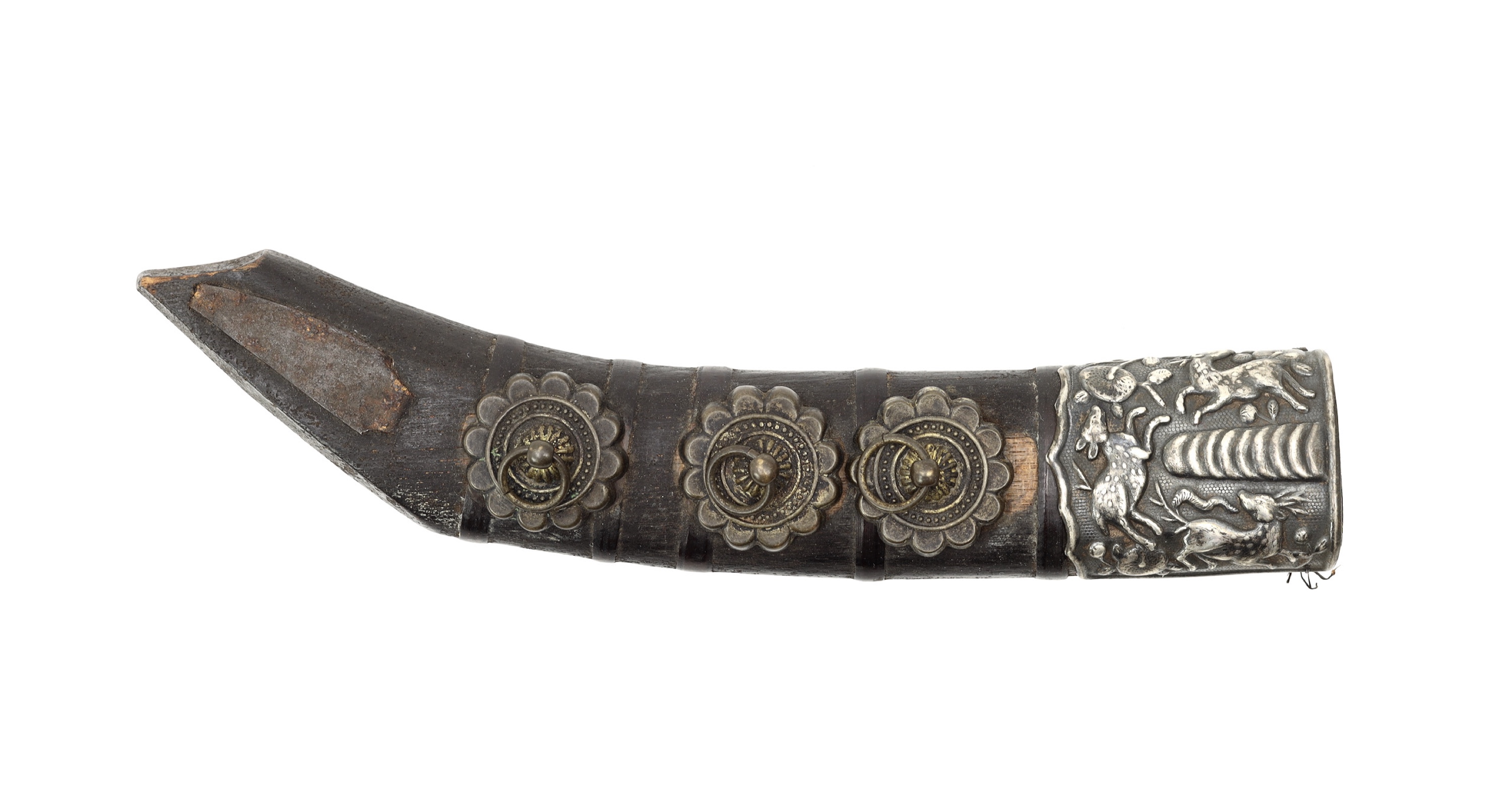 This item has been sold.
Read full article
Length

The Ainu people were the earliest settlers of Hokkaido, the northernmost island of the Japanese archipelago, and are considered the indigenous people of this area. Their culture is very much their own, although they have taken elements from neighboring cultures in their local arts and crafts.

Some of this influence is seen on their swords, some of which resemble the Japanese katana with often chrysanthemum-shaped openwork guards. The blades tend to be locally made, and more mainland Asian in form, but imports from Japan are seen at times as well. Ainu hilts appear to be wholly their own, of a form unknown in any of the surrounding regions.

Most Ainu hilts are made of wood, with an open slot on the backside. The front is often decorated with a number of fittings with rings that appear to be taken from Japanese samurai armors, or replicated from them. At the top is a metal shield-shaped plate.

The Ainu hilt presented here is of such a classic form. Made of a single piece of blackened wood, with three fittings with rings at the front and a slit in the back. It is reinforced with strips of dark reddish peach bark. At the very top is a silver shield-shaped fitting, tied to the hilt with -now fragile- strips of bark.

The work on this silver plate is remarkably fine. Most of the work is executed in repousse, each element raised in relief over a stippled background. The dots in the background, however, are not done in repousse and I have not been able to determine quite how they were done. They are very precise and consistent, even under high magnification.

The decoration consists of deer and flowers around a central mound. A hill, rock, or mountain as a central decorative element is ubiquitous in art throughout Asia. It represents something unmoving in the midst of a universe in motion, and as such often refers to authority. In the case of Chinese art, it refers to the emperor.

In nice, original condition throughout. No significant losses or damage, regular wear, original patina. The fibers that hold the shield are fragile. 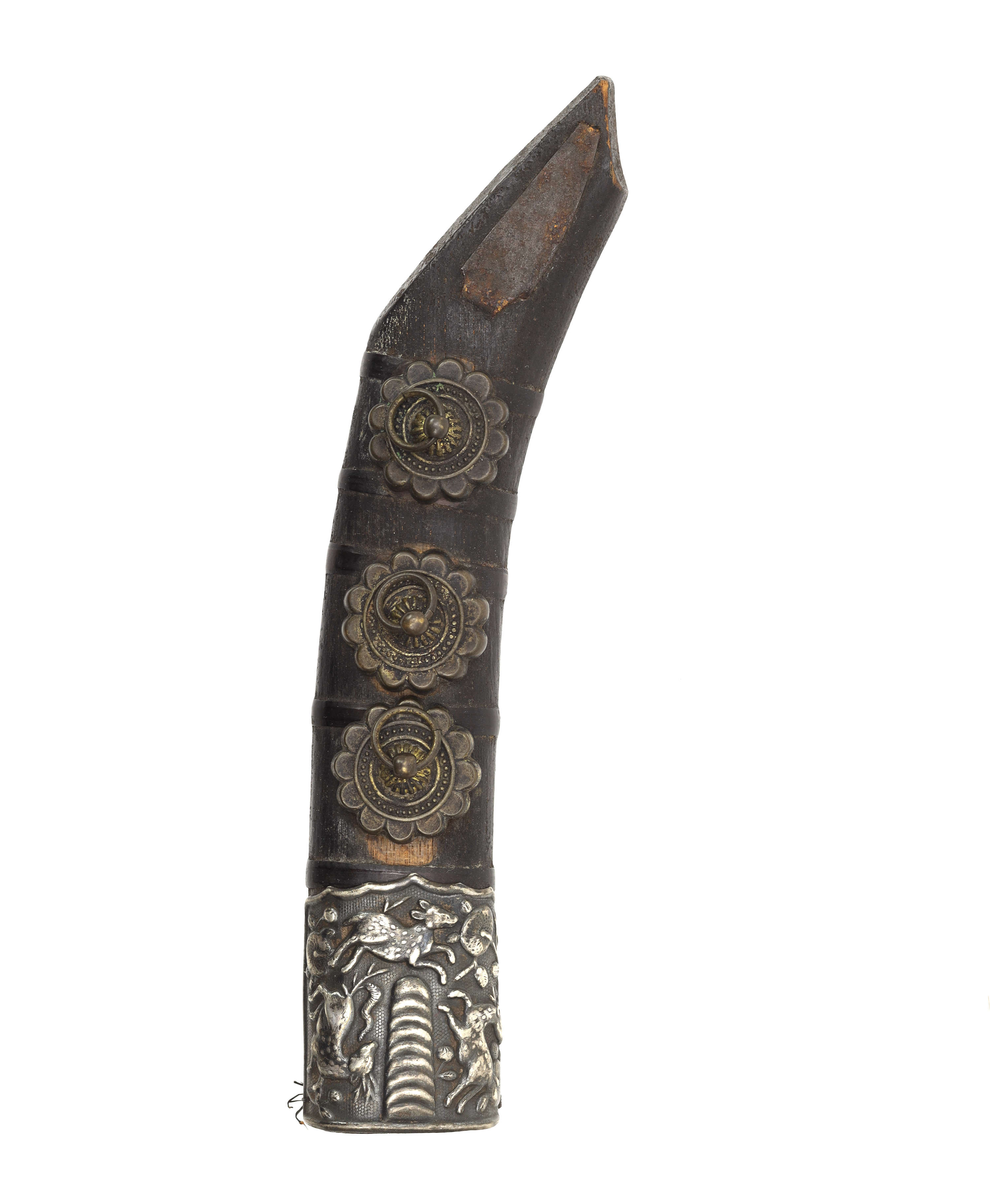 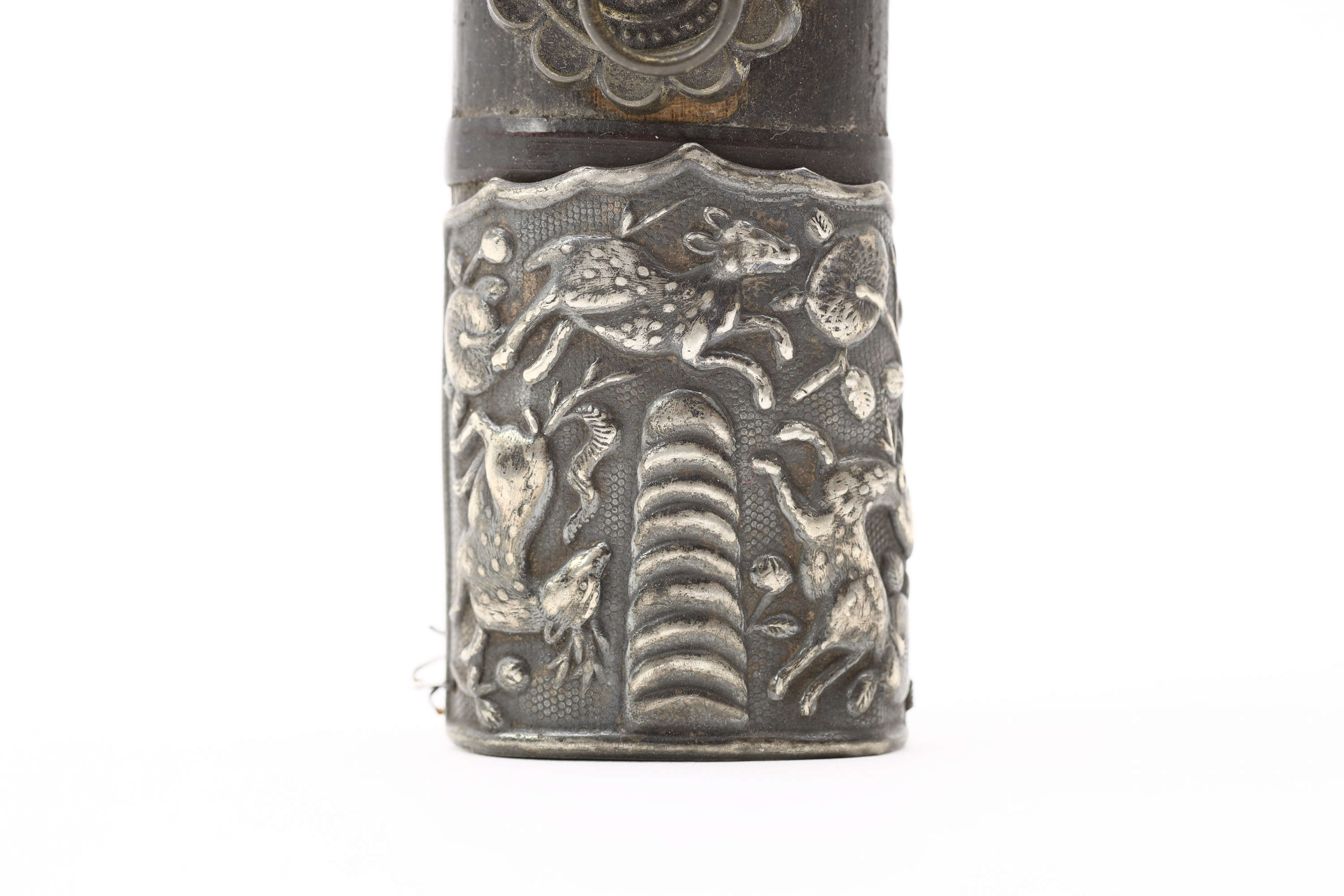 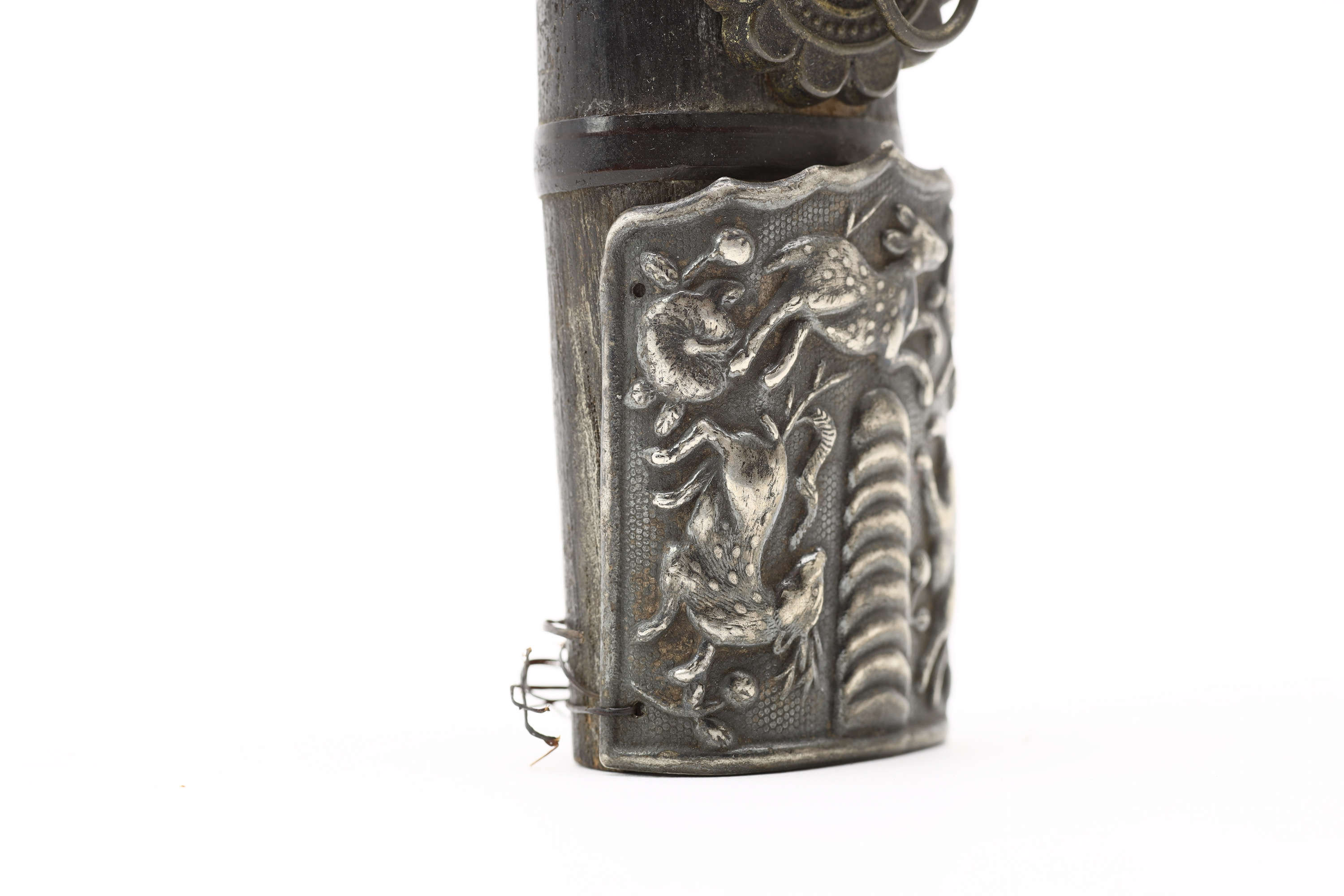 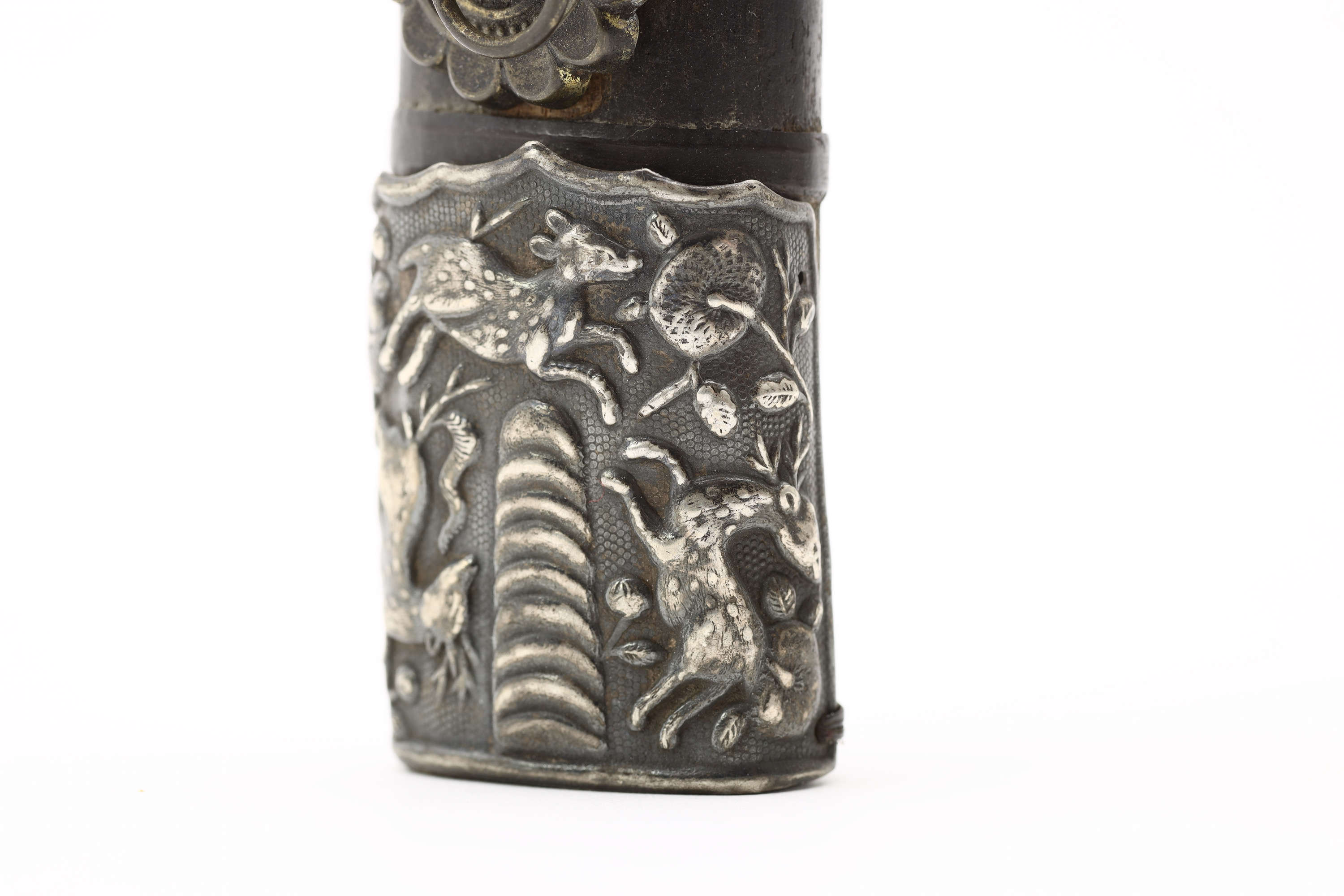 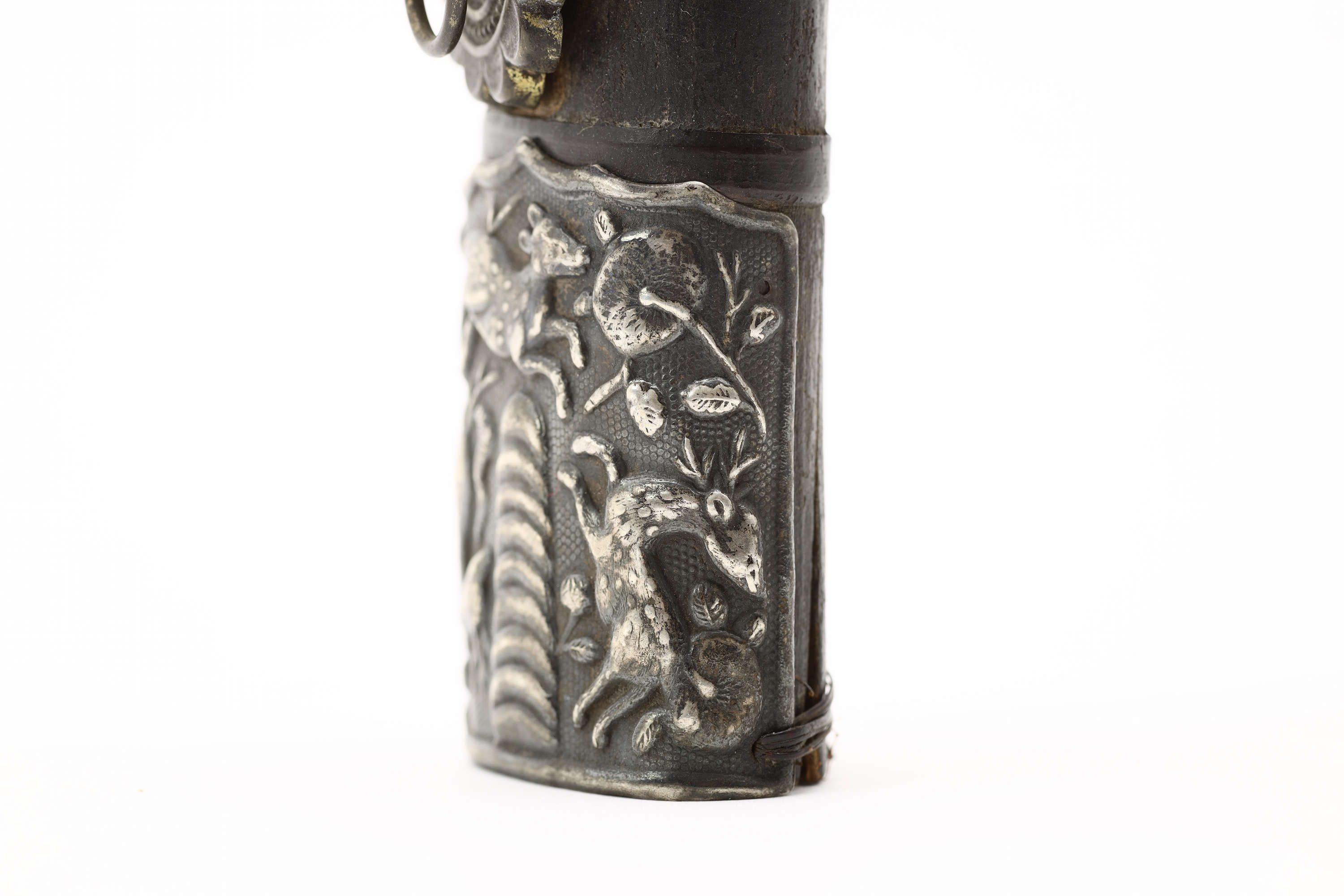 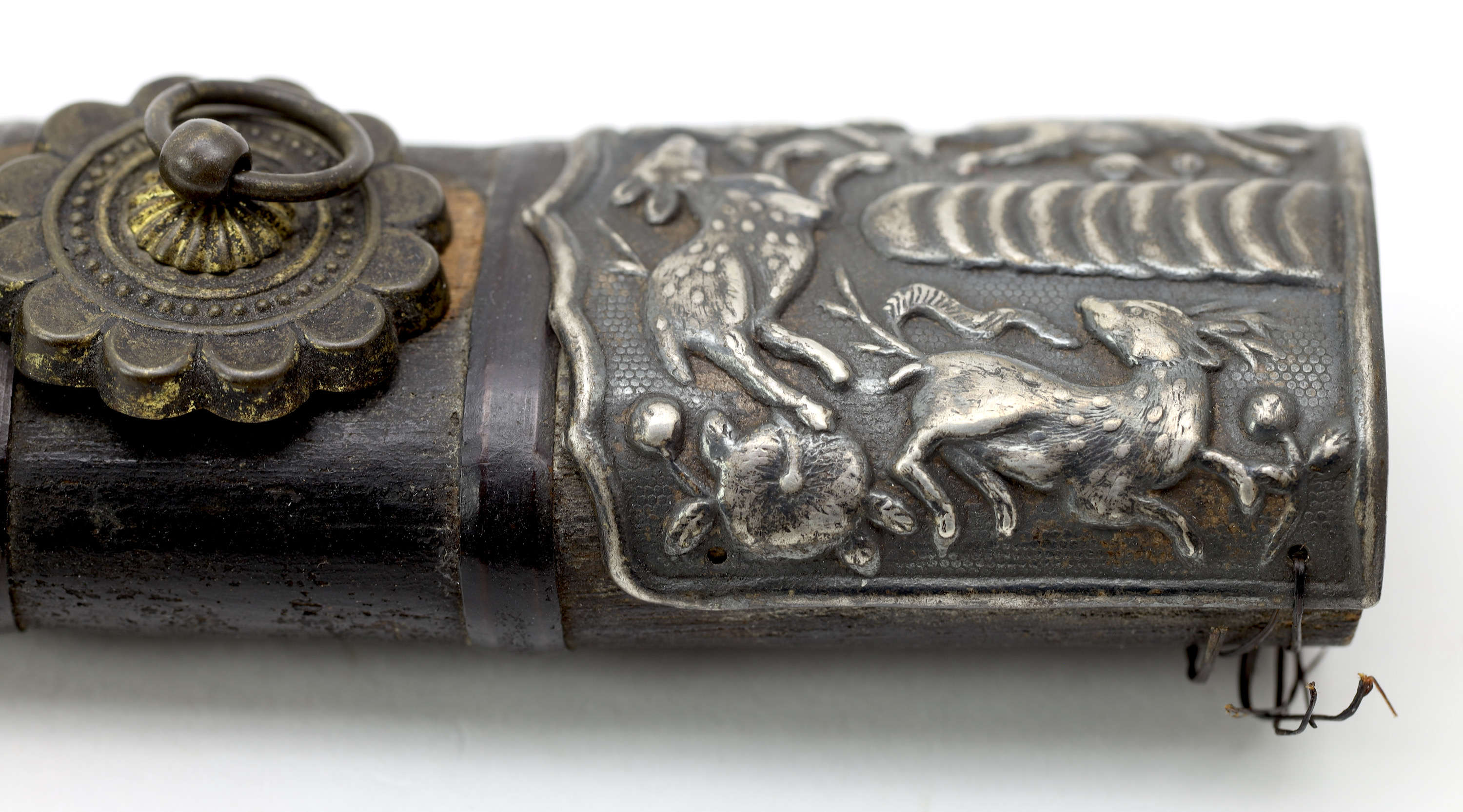 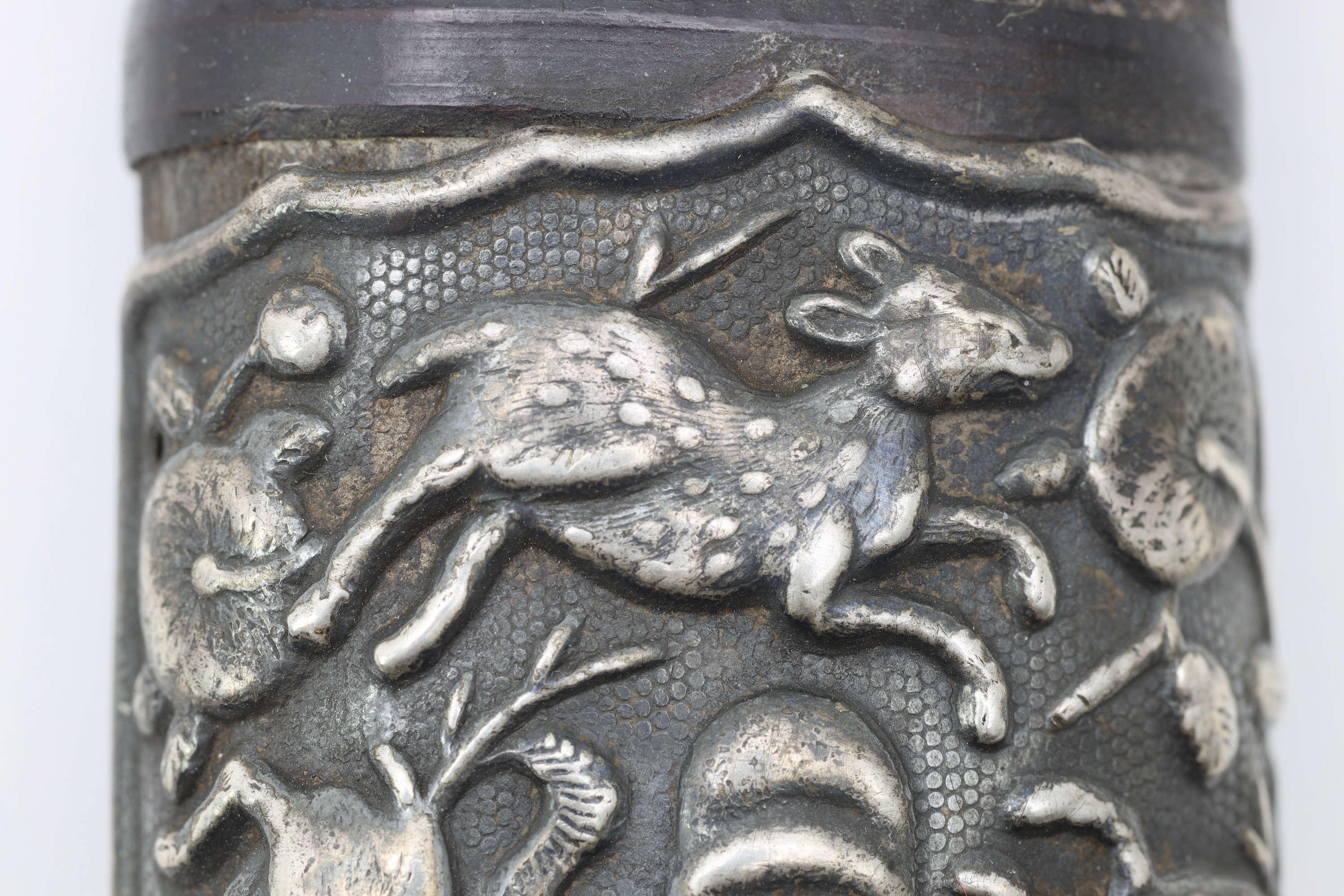 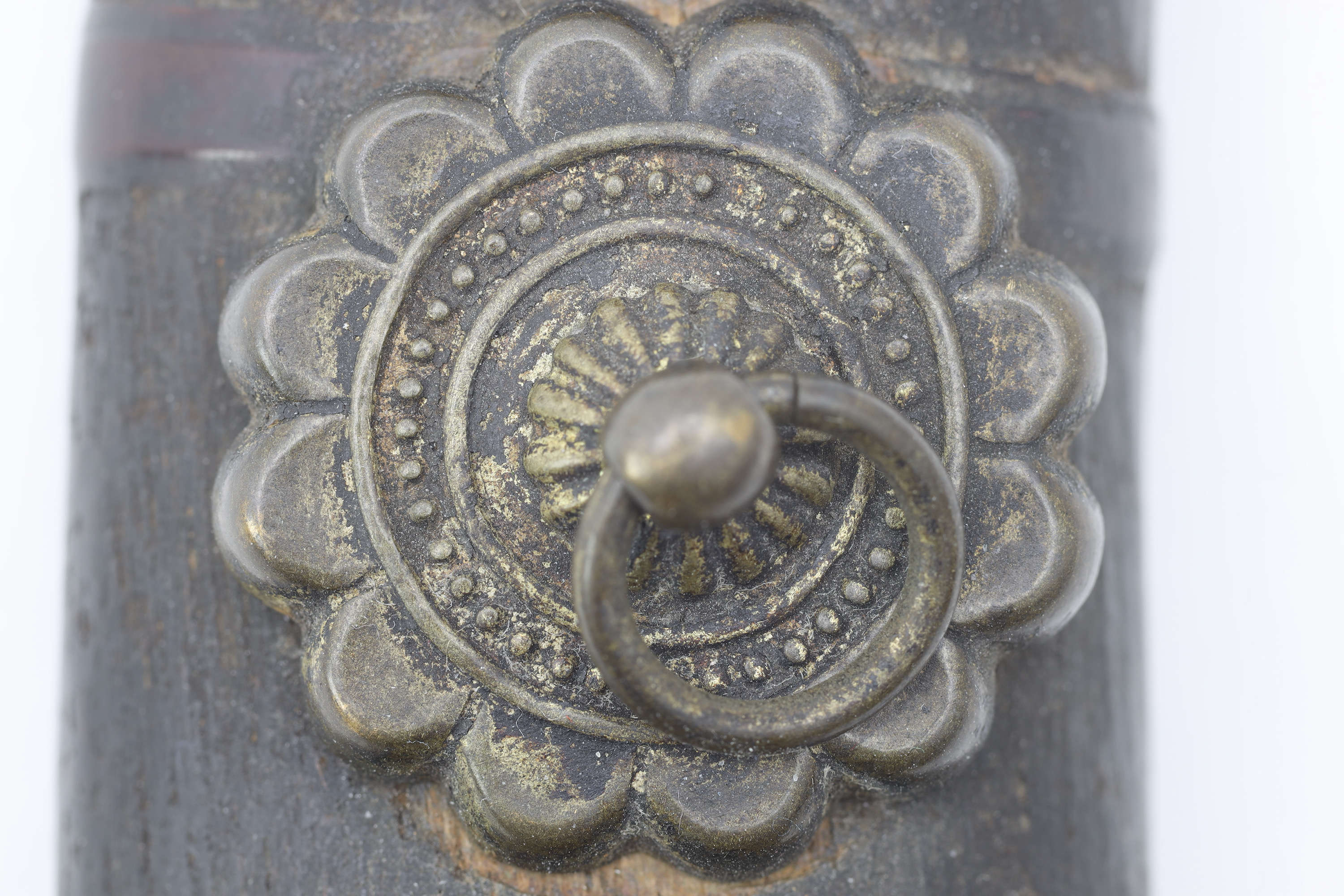 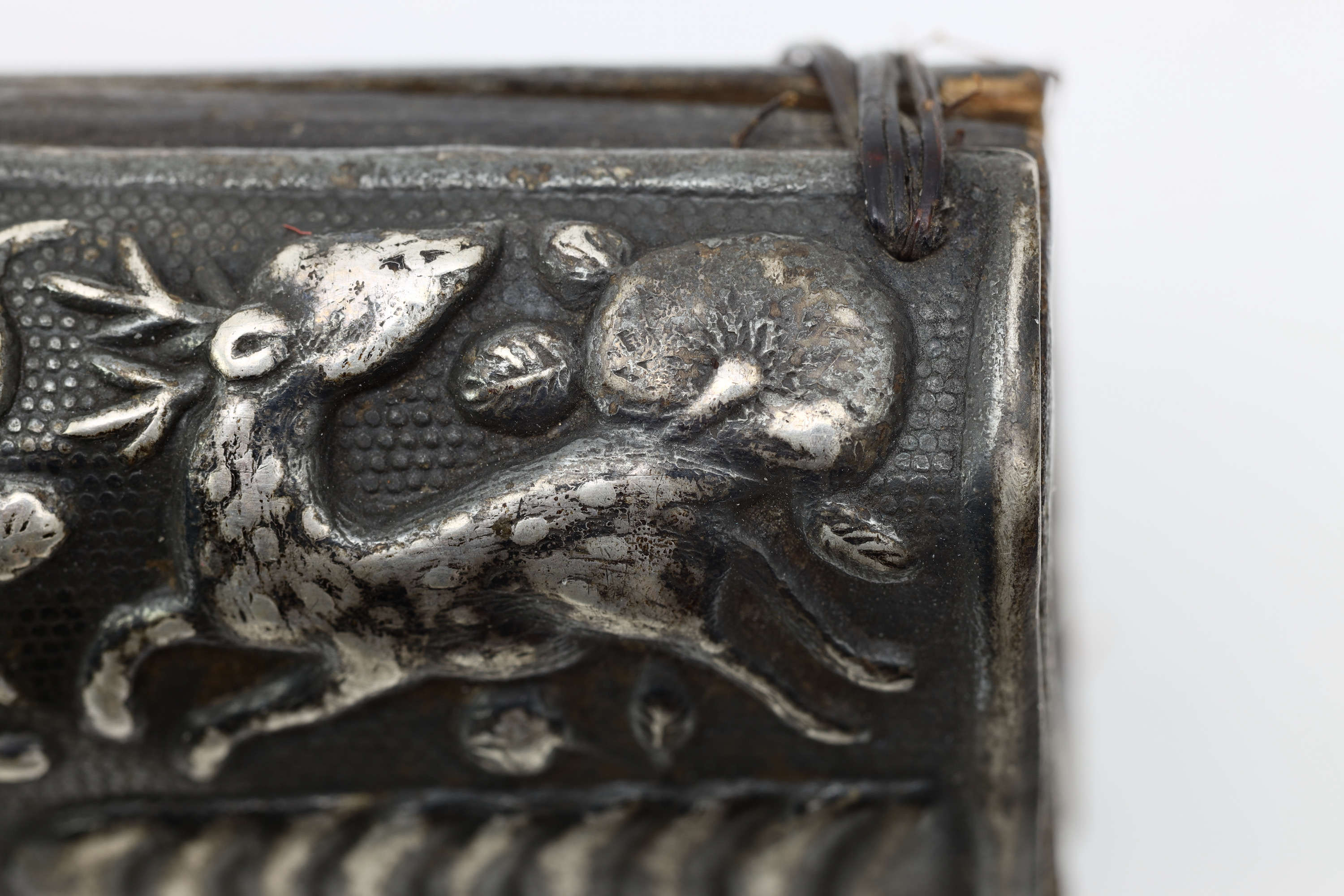 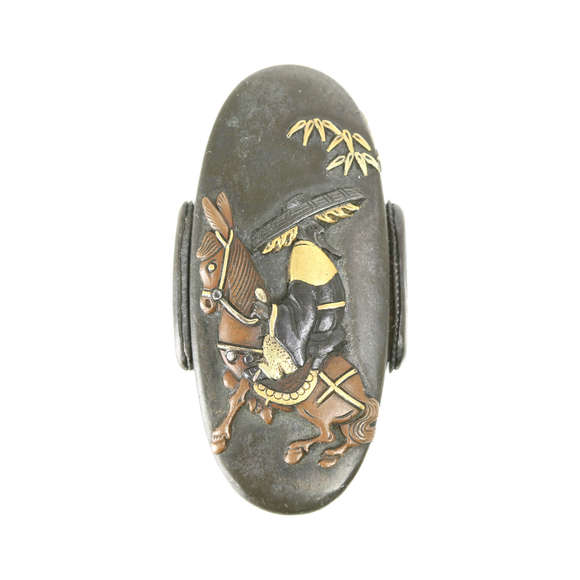 A by-knife for a Japanese sword, with a hilt shaped like a sword tang.