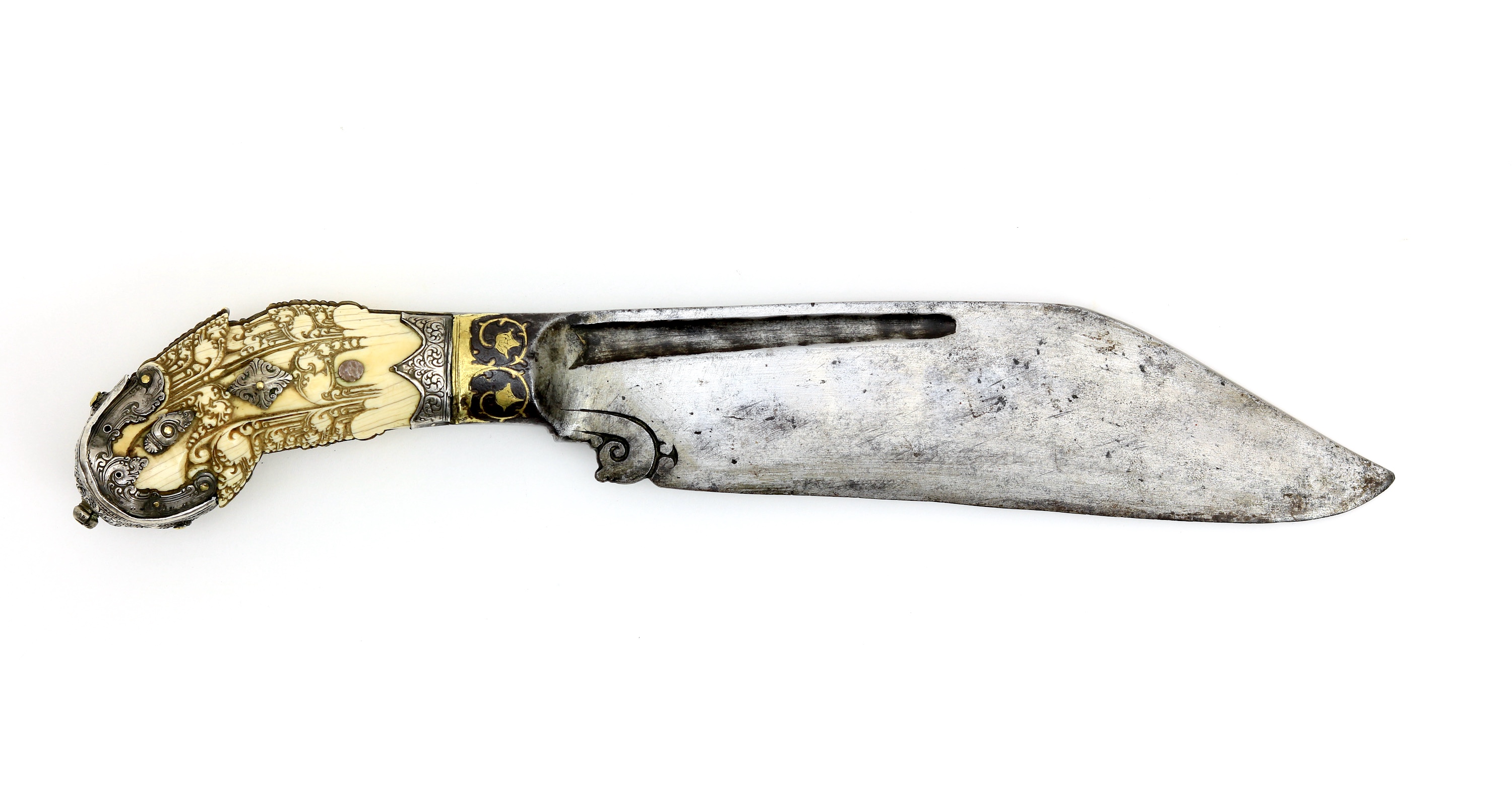 Temporarily not for sale, pending the EU certificate that is required from 19th of January 2022.

A nice quality piha kaetta, or more correctly transcribed, pihiya kättha. Such knives were made primarily in the 18th century in the Four Workshops of the King of Kandy, and were bestowed as favors by the king.

It has a massive blade that is forged out of a single piece with its iron bolster. There is a prominent groove on either side near the spine. The base of the blade has a typical Sinhalese curl on the edge side, called liya-pata, a staple of Sinhalese design. The edge is slightly recurved, the spine of the blade slopes down to meet the edge.

The bolster is overlaid with a bright golden metal, possibly a brass-gold alloy that doesn't seem to patinate as normal brass does. The designs are two flowers encircled by their own stem, a design known locally as liya-vẹla.

The full tang construction hilt is covered with two slabs of elephant ivory, with buffalo horn plating in-between the tang and the ivory. The sides of the tang are lined with brass. The hilt is entirely carved with a great multitude of liya-pata and finished with ornamental plating in silver.

The pommel is covered with a piece of silver sheet, engraved with a pattern that resembles the stylized clouds seen on Chinese textiles. It is a pattern I'm not used to seeing in Sinhalese art. The likeness to the robes may be purely coincidental, but there is a possibility they were based on Chinese fabrics that were traded in the colonial trading posts of Sri Lanka at the time.

In pretty good condition for one of these, retaining a beautiful original patina throughout. No losses to the ivory hilt itself. One small ornamental silver plate is missing on the left side of the hilt. Some pins that hold the plates are missing. The back pommel is dented. The ball at the end of the pommel snapped off and was repaired. The repair is entirely invisible but good to know anyway. No scabbard.

A very nicely preserved specimen of such a heavy pihiya kättha, with minimal losses, and in good condition. The hilt is very nicely carved and the work on the bolster is an elegant and less commonly encountered touch.

CITES
The handle is of ivory of the species elephas maximus, listed on CITES appendix I.

The item is within article 2 of council regulation EC NO338/97 and within Convention of International Trade of Endangered Species (CITES): The materials were removed from the wild and significantly altered from their natural state well before the date of convention: June 1st, 1947. It can be freely traded within the EU without a permit, and is eligible for a CITES export permit for trade outside of the EU.

Buyers outside of Europe: Beware that it may not be possible to export the item to your country due to restrictions on the international ivory trade. CITES sets the minimal restrictions, countries and states under the convention often maintain further restrictions on top of CITES.

Peculiar shield with catching hook, used by the Santali people of Bengal.