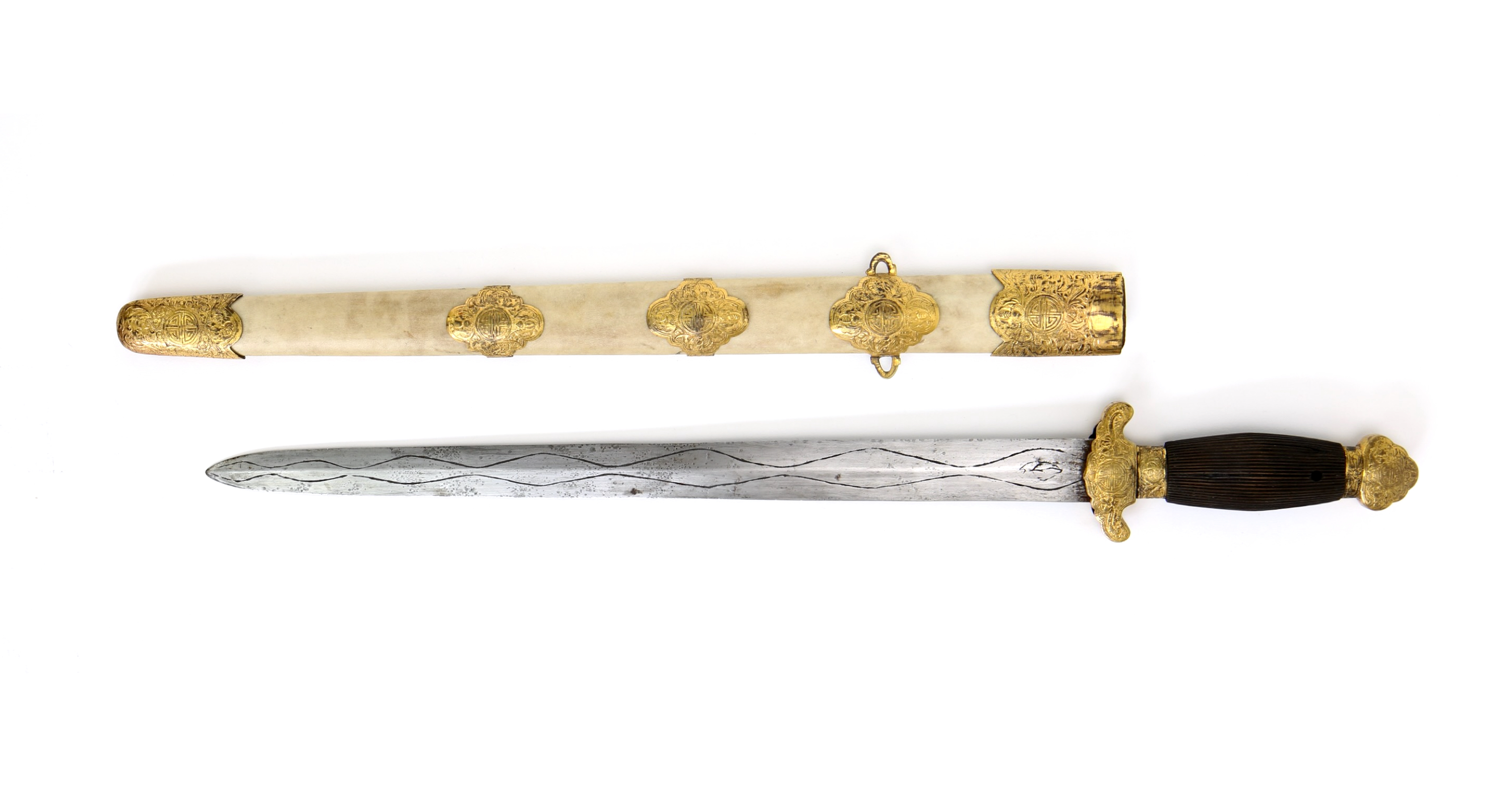 From a European collection

The duǎnjiàn (短劍) is a short, double-edged sword that was commonly worn by men within the Qing realm, Han and minorities alike. It served as a status symbol and a weapon used for dueling or self-protection when on the road. It was carried as a single weapon or sometimes in pairs.

The majority of duǎnjiàn on the market today are mere tourist curios, crammed out in large numbers in Southern China to meet the demands of tourists who were looking for something unusual to bring back home. Preferably something that fitted within their steamer trunks, and these swords met both requirements.

More rarely encountered on the market today are somewhat better quality pieces that were not curios, but were probably proudly worn by whoever commissioned them. 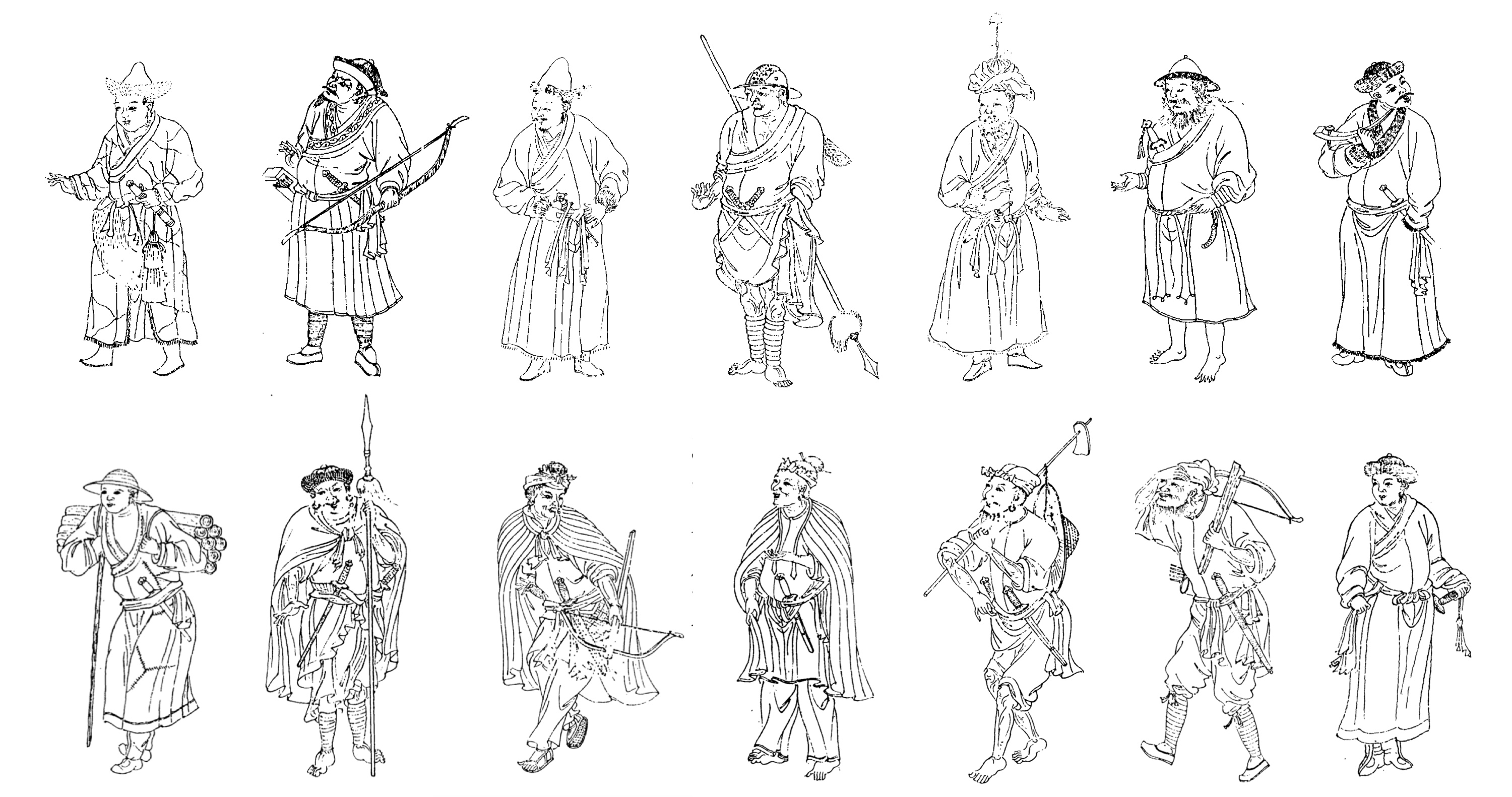 Chinese ethnic minorities carrying shortswords.
From the woodblock version of the 18th-century
Huáng Qīng Zhí Gòng Tú (皇清職貢圖) or
"Illustrated Descriptions of the Tributaries to the Qing Empire".

Adventurer William Mesny -who eventually became a general in the Qing army- gave a lively description of a dueling culture with shortswords in China that lasted into the early 20th century:

Fu Hu Chün 副護軍. Second battalion of guards. This is an extra battalion of guards, all picked young Kuei-chou men, between twenty or thirty years old, real swashbucklers, good looking and lavishly decorated with scars obtained in battle or duel. Every other man of them has a Yüeh Ching, moon instrument (a sort of short handled like discular guitar) slung to his back and carries a dagger as well as a fancy shortsword at his side. These are duelists by profession apparently and also troubadourists of the mountains too. Each warrior has his fancy girl at home and an extra one or two in every town. Duelling and love-song singing is a sort of pastime with them when not engaged in the stern realities of actual warfare.

They fight duels with each other sometimes as soon as they are cured from former wounds as acts of revenge, called Pao Chou (報仇), and they sometimes take up each other's cause, as for instance in case of wrongful treatment of the weak and defenseless by the strong, or using might against right; this kind of protection or defense is called Pao Pu Ping (抱不平), and is much in vogue in Kuei-chou at this present time. Many young men learn the use of weapons and take a great deal of physical exercise so as to accustom themselves to hardships with a view of avenging some one's wrongs. Some or many such are now enrolled in the ranks of our Fu Hu Chün, the second battalion of General Liu's guards. Nearly all these young men have a servant to do their camp work for them, to act as squires to knights of olden times. Soldiers of the guard battalions all hare the characters Ch'in Ping 親兵 Body-Guard, Garde du Corp, sew on front and back of their uniforms, whilst ordinary soldiers have the word Yung 勇, which means Brave of Knight. It is usually from the ranks of distinguished Yung the Ch'in ping are recruited; all-being picked men as often for their good looks as their martial qualities, as may be easily perceived on parade.1

A fine example of a duǎnjiàn with some unusual features.

First and foremost, the blade does not seem to be of Chinese origin. The thickness of the steel and its springiness suggest European steel, while the relatively coarse engravings on the blade elude any classification. They feature a leaf at the base and two meandering lines running from base to tip.

It comes mounted in a complete set of fine Southern Chinese duǎnjiàn mounts made of finely engraved gilt copper alloy. The decoration consists of stylized bats and longevity symbols. The bats are a pun for fú (福) meaning "luck" while shòu (壽) means "longevity". Such swords are also known as fúshòujiàn and seemed to have been primarily produced in Canton, known today as Guangzhou.

The grip is made of ribbed hardwood, often encountered on this type of sword. The scabbard is unusual in that it is covered with white vellum, a kind of fine parchment. This material was popular on European smallsword scabbards in the 18th century.

Swords of this general type can usually be dated to the mid to late 19th century. However, the finer execution of the mounts and the thick gilding suggests an earlier date. There is a sword in identical gilt mounts in the armoury of Abbotsford House in Scotland, which was part of the arms collection of author Sir Walter Scott (1771-1832). It was most likely collected before the 1820s and may have already had some age when collected.

Fine work in gilt copper alloy was especially popular in China during the final years of the Qianlong reign, which lasted until 1796, and the reign of his son the Jiaqing Emperor which lasted until 1820. The vellum may have come from one of the thirteen foreign trading posts located along the Pearl River southwest of Canton. The Dutch ran a trading post there from 1748 to 1803. 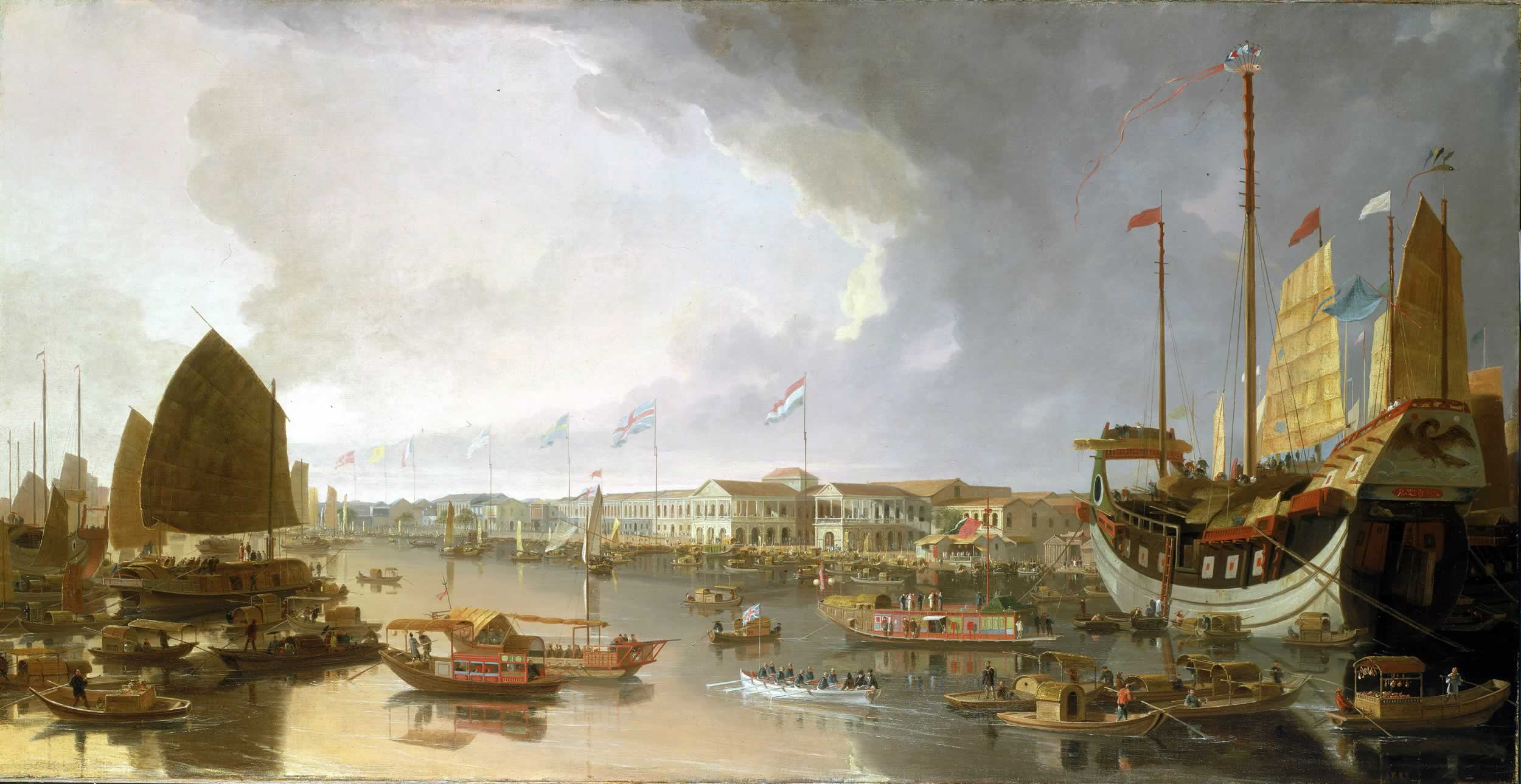 "View of the Canton Factories" by William Daniell, circa 1805.
It shows the trade posts along the Pearl River, with the Dutch post to the far right.
National Maritime Museum, London, accession number ZBA1291.

It remains a mystery for whom it was made, it could have either been a European traveler, trader, or seaman who had a European blade mounted in nice Chinese mounts. Or the other way around, a resident of Southern China who commissioned the production of a duǎnjiàn using a foreign blade and scabbard material, but otherwise executed in a -to him- familiar style. 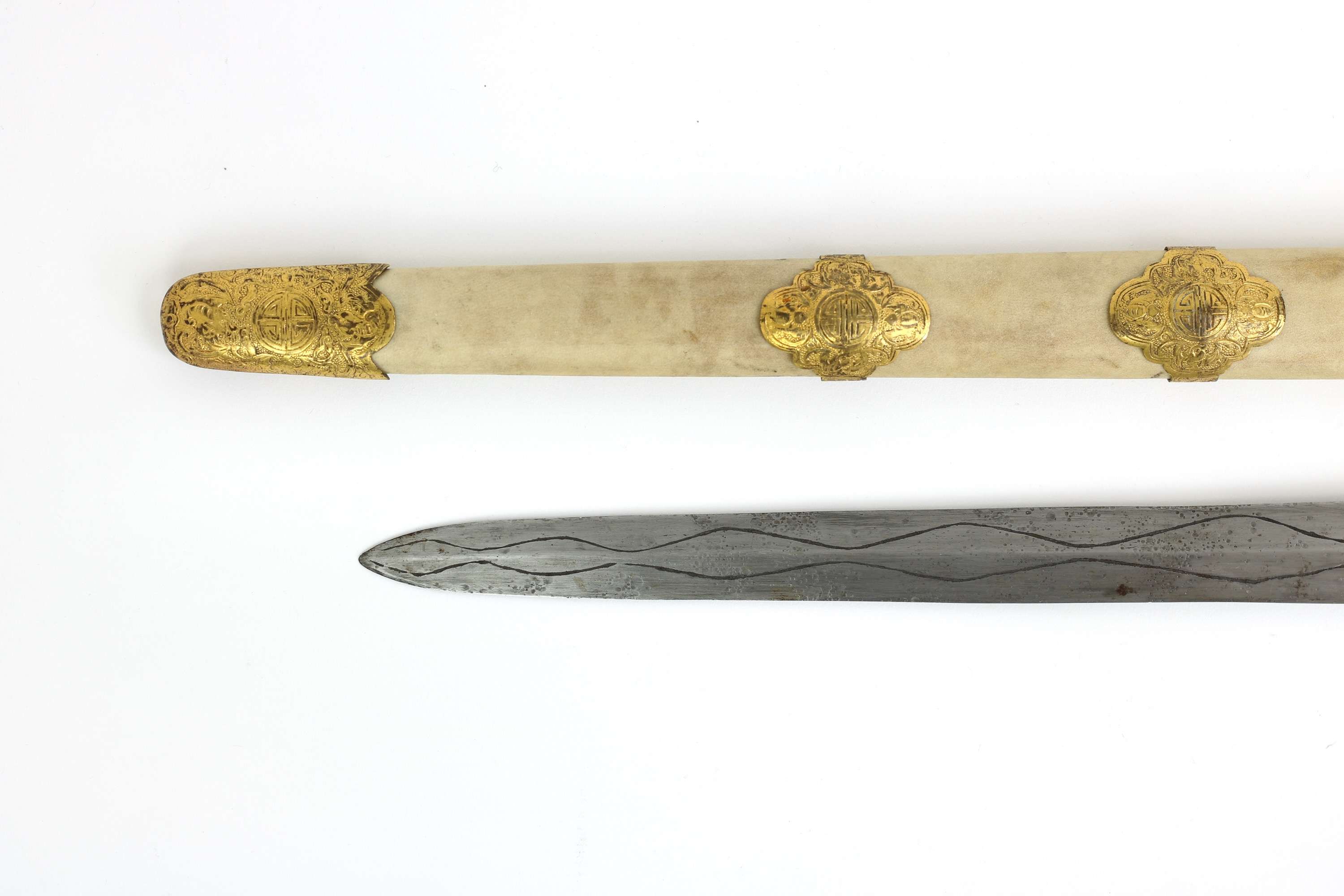 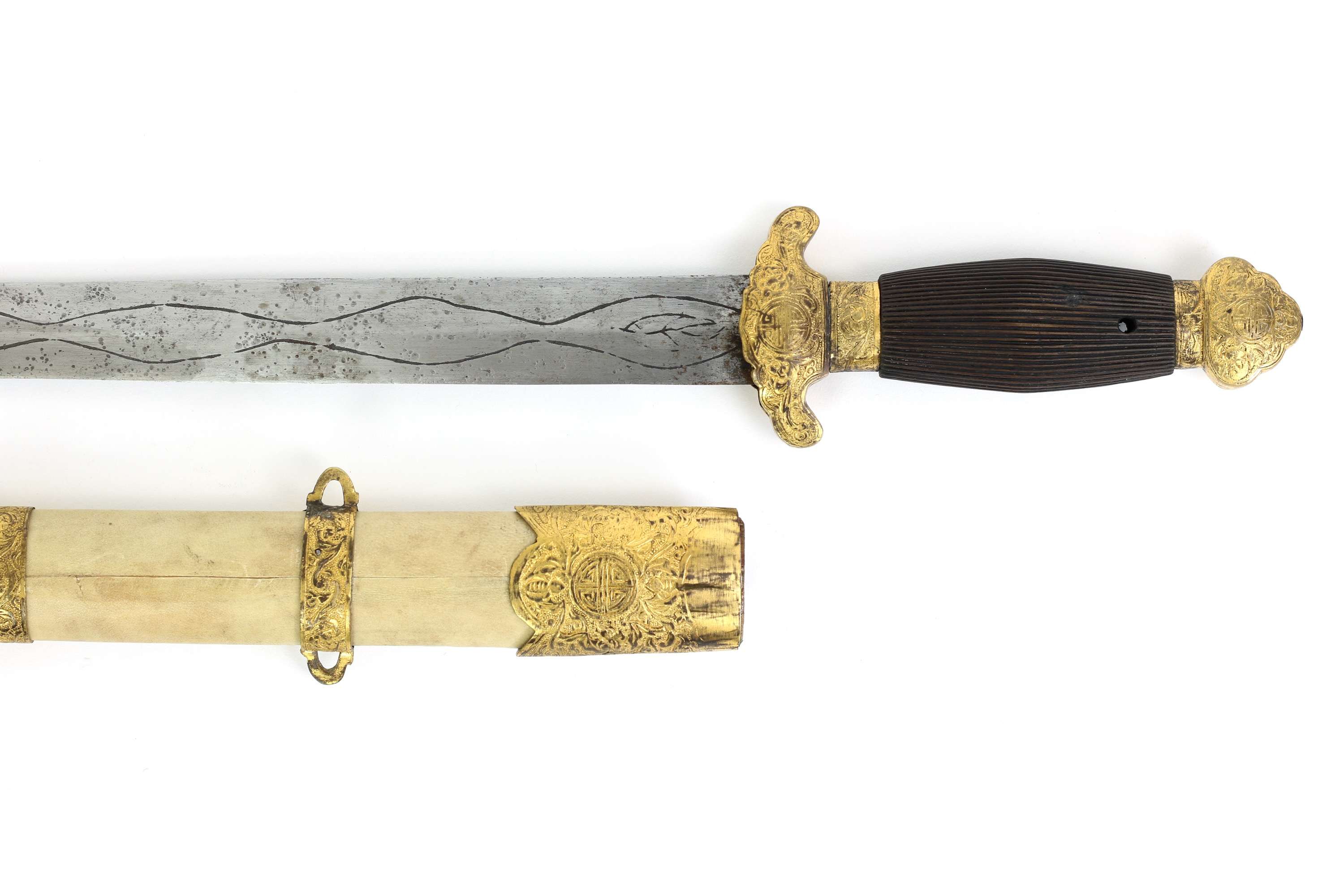 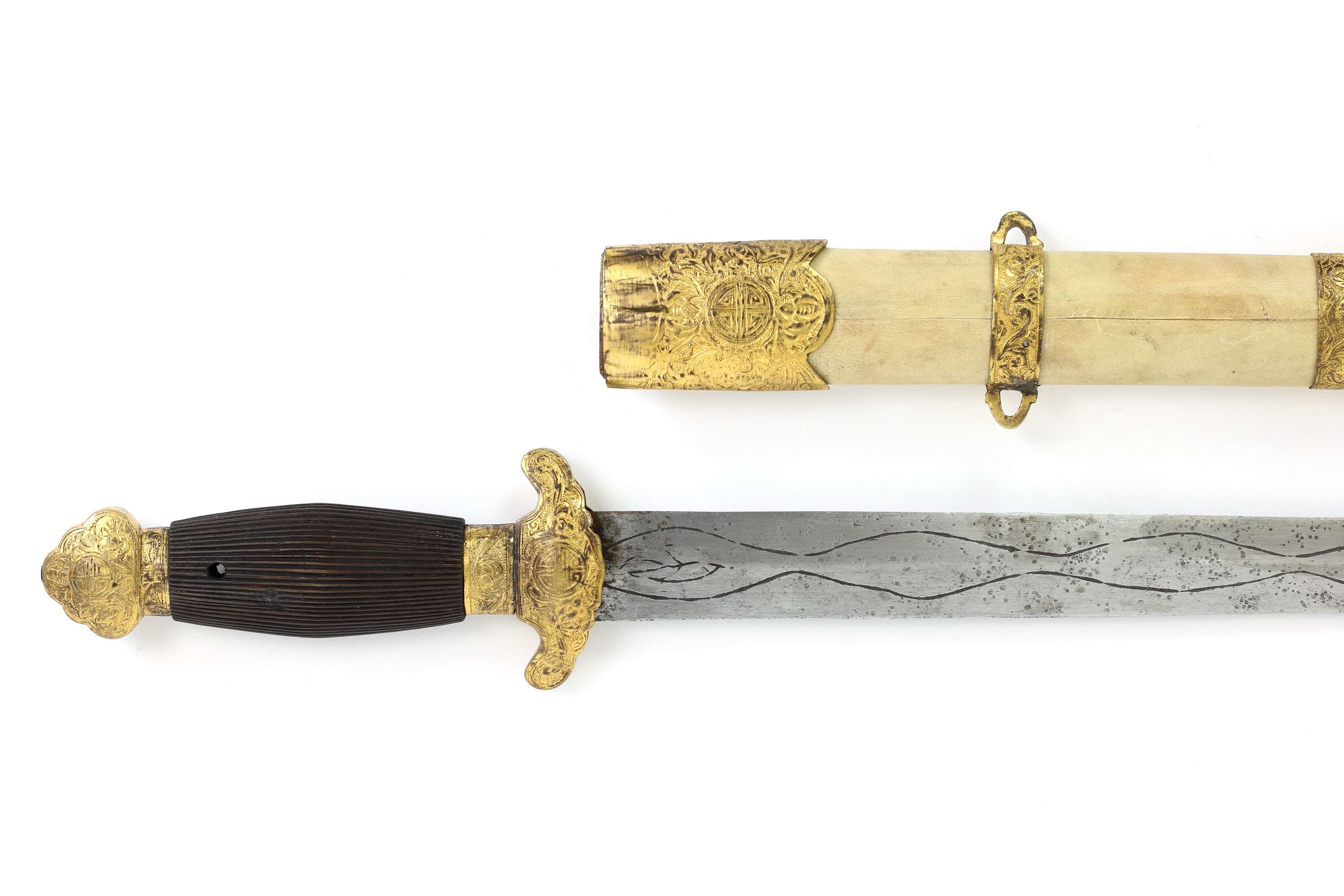 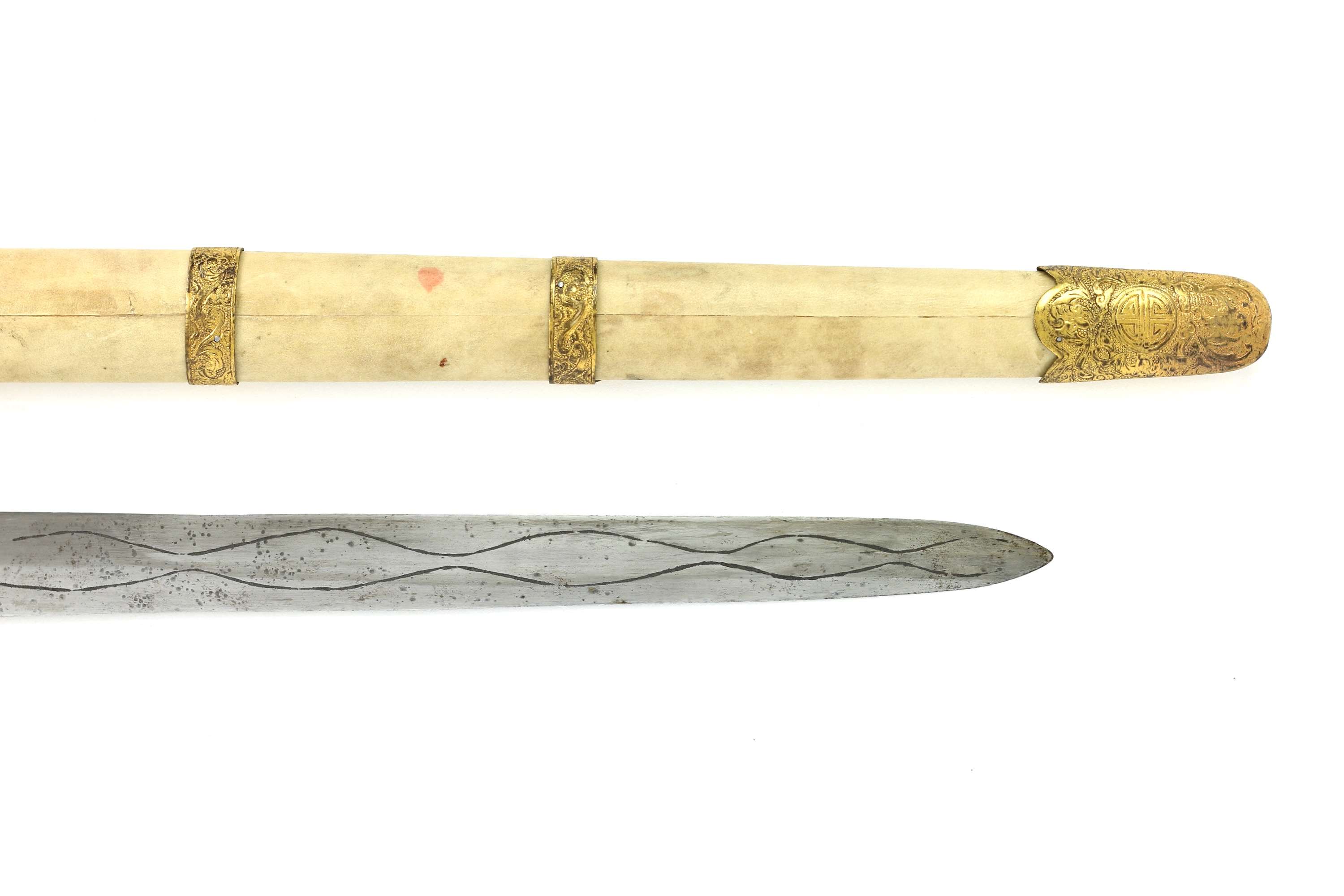 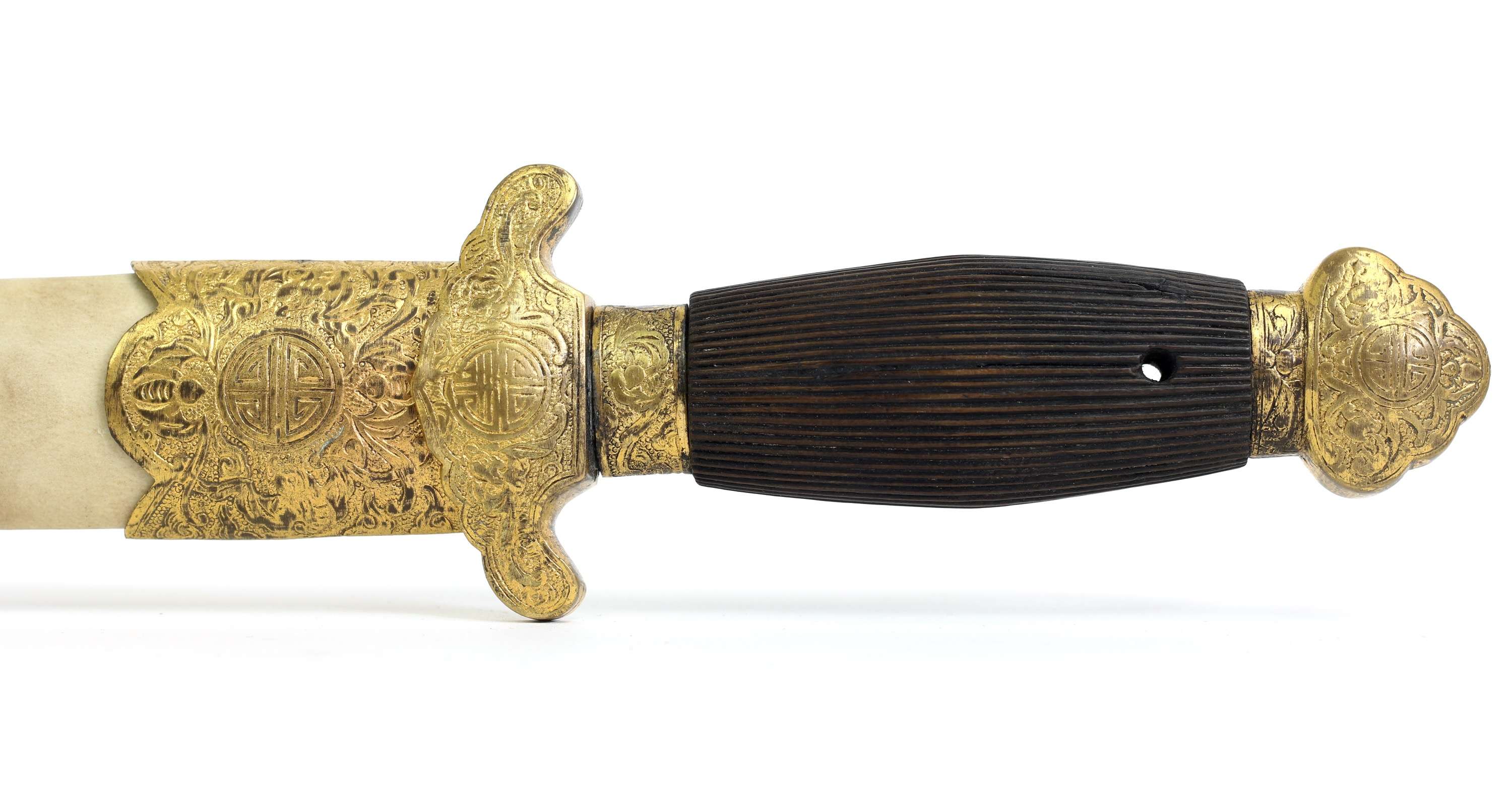 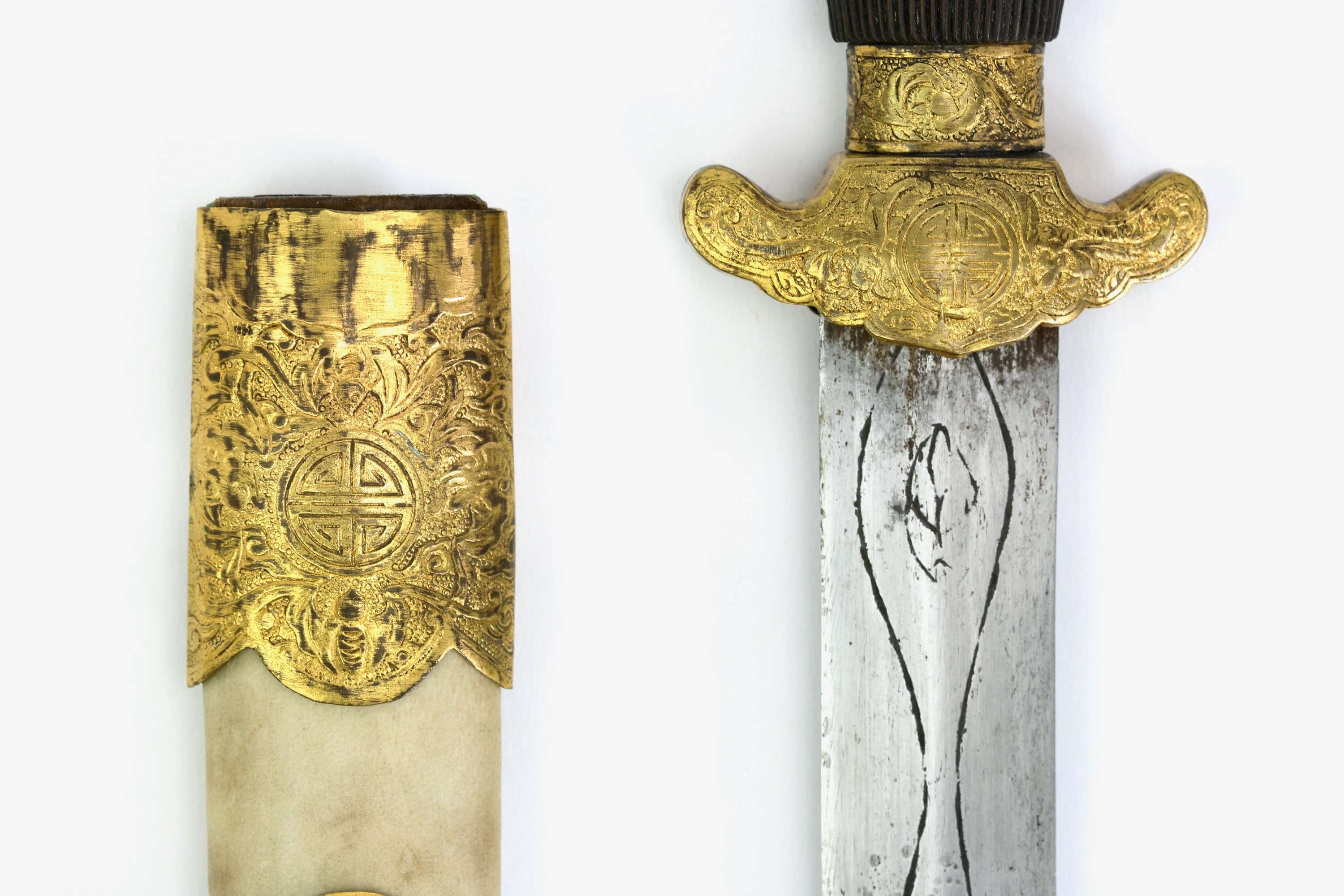 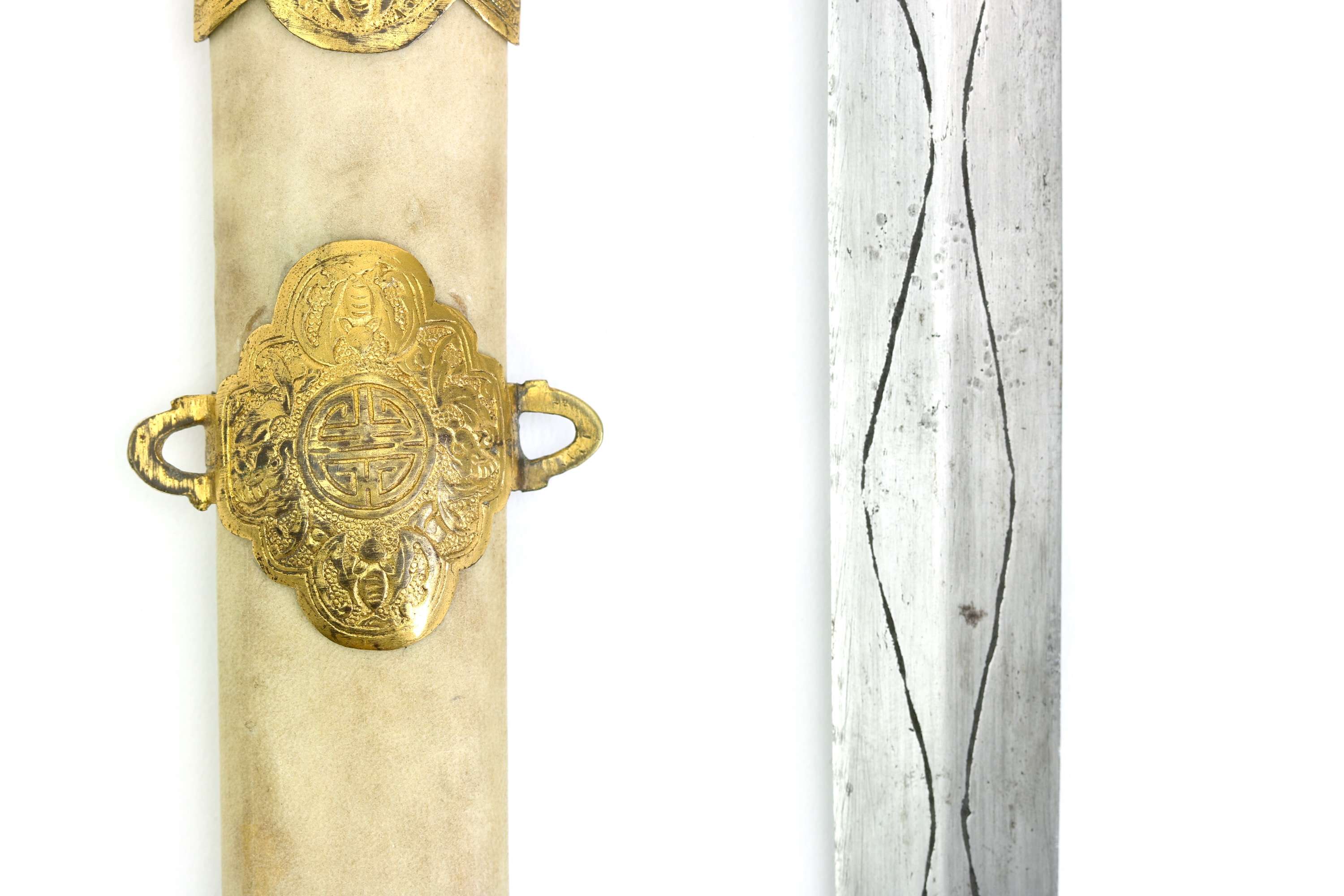