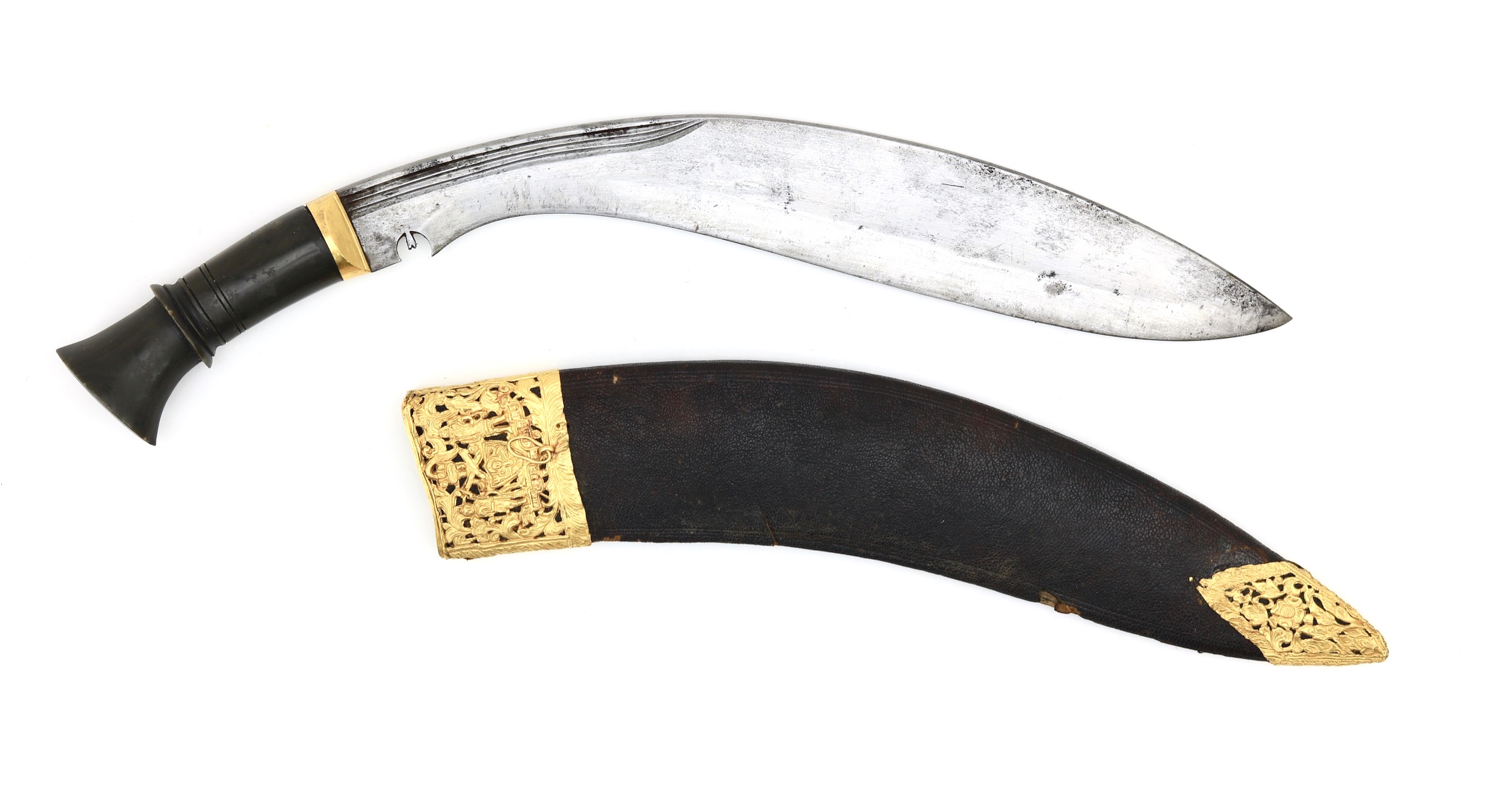 There is a small group of gold-mounted Nepalese khukuri that are described by collectors as "Palace presentation khukurī" or "Royal khotimora khukuri".

I have found little information to either dismiss or confirm this claim, but gold is very rarely found on anything but royal items and presentation khukurī often feature the Nepalese coat of arms so it seems likely.

Very few of these survived today because they were cannibalized by opportunists for their gold content, and the rest was discarded.

Built around a fine, heavy but slender blade that is also described as sirupātē meaning the leaf of a siru plant.1 It has three narrow grooves at the base, running just under the spine before turning up and terminating. The blade is kept in original condition and was not polished or etched, but I expect it should be of pretty good steel.

The grip is made of a nice quality polished black buffalo horn and has a golden bolster.

The scabbard is made of wood with its original fine-grained morocco grained leather with tooled details. Scabbard mounts are made of pure gold sheet, pierced and worked in repousse. The chape is decorated with flowers, flames and vegetal elements on both sides. The locket shows the coat of arms of Nepal.

The locket shows the coat of arms of Nepal as it was from around 1920 to 1935, so it is to be expected that the piece -as a whole- dates from this period, although the blade itself may, of course, be older. 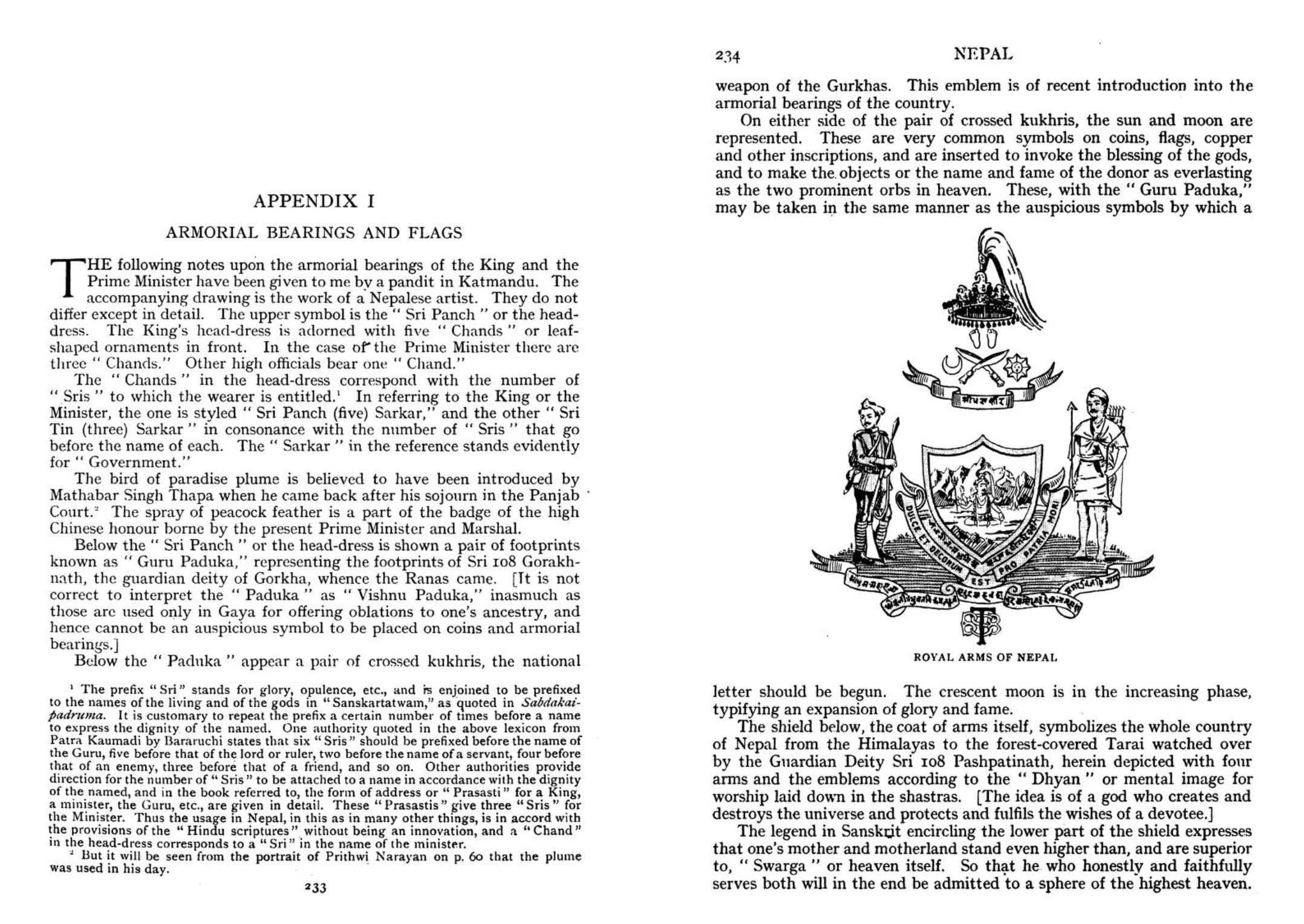 Landon Perceval describing the Nepalese coat of arms as it was in 1928.

He states here that the khukuri were a recent addition, while by 1935 the crown was omitted.

The gold was tested at 22 carats and estimated at around 30 grams, which comes to about €1500,- worth of gold alone per current rates.

Some denting, cracking and losses to the golden mounts due to the thinness of the gold. Some damage to scabbard wood and leather also, some loose thread. In stable condition now. Some light staining to the blade. A small crack in the horn grip and bolster due to shrinkage of the horn over time. The blade still sits tight. See photos for full condition.

A rare example of a gold-mounted khukuri that was most likely a presentation piece presented from the Nepalese royal house to someone that earned merit. Despite the use of gold, the blade itself is of sturdy proportions and a real "user". Because most of these have been cannibalized for the gold in the last century or so, examples today are very rare. 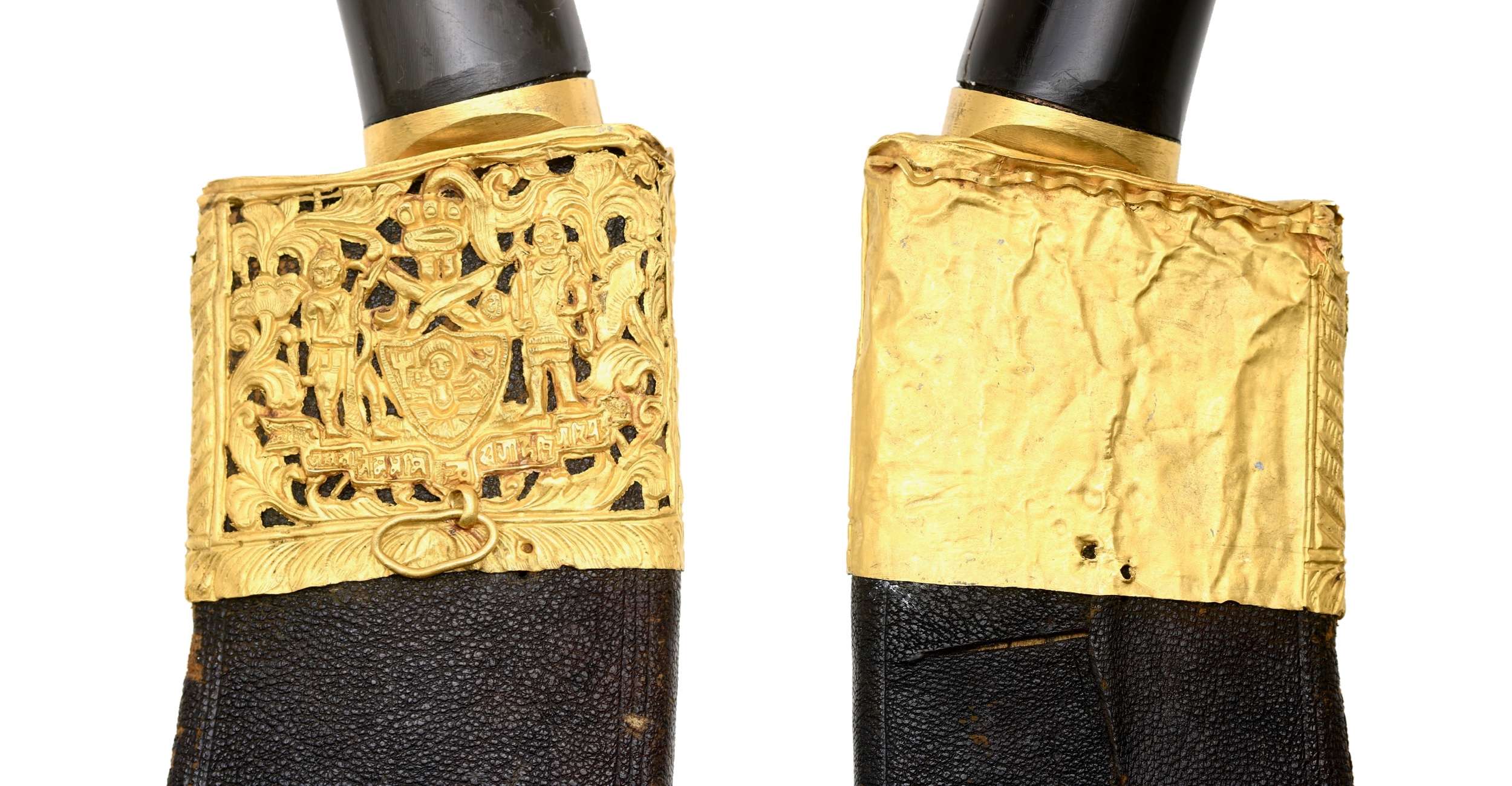 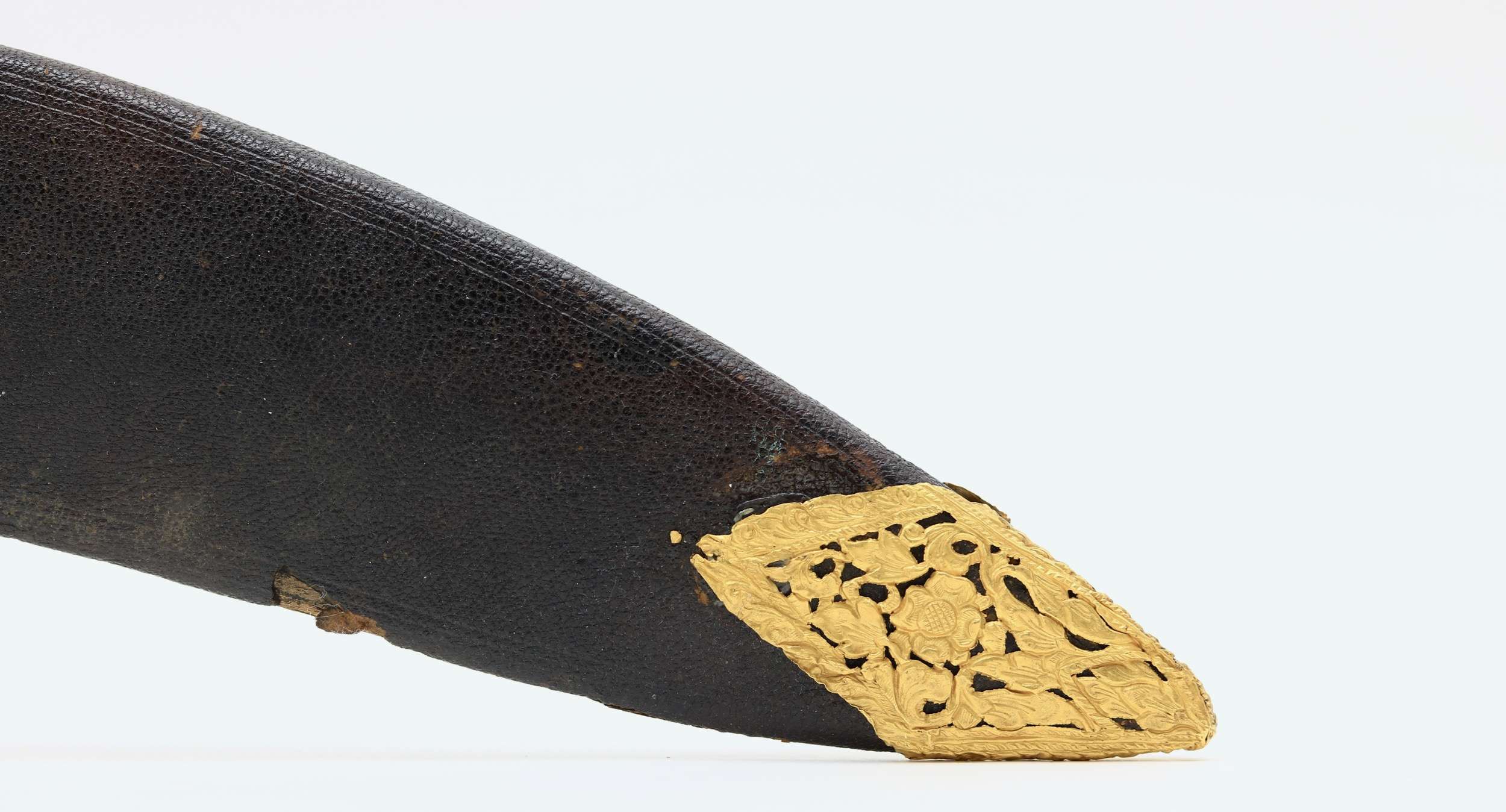 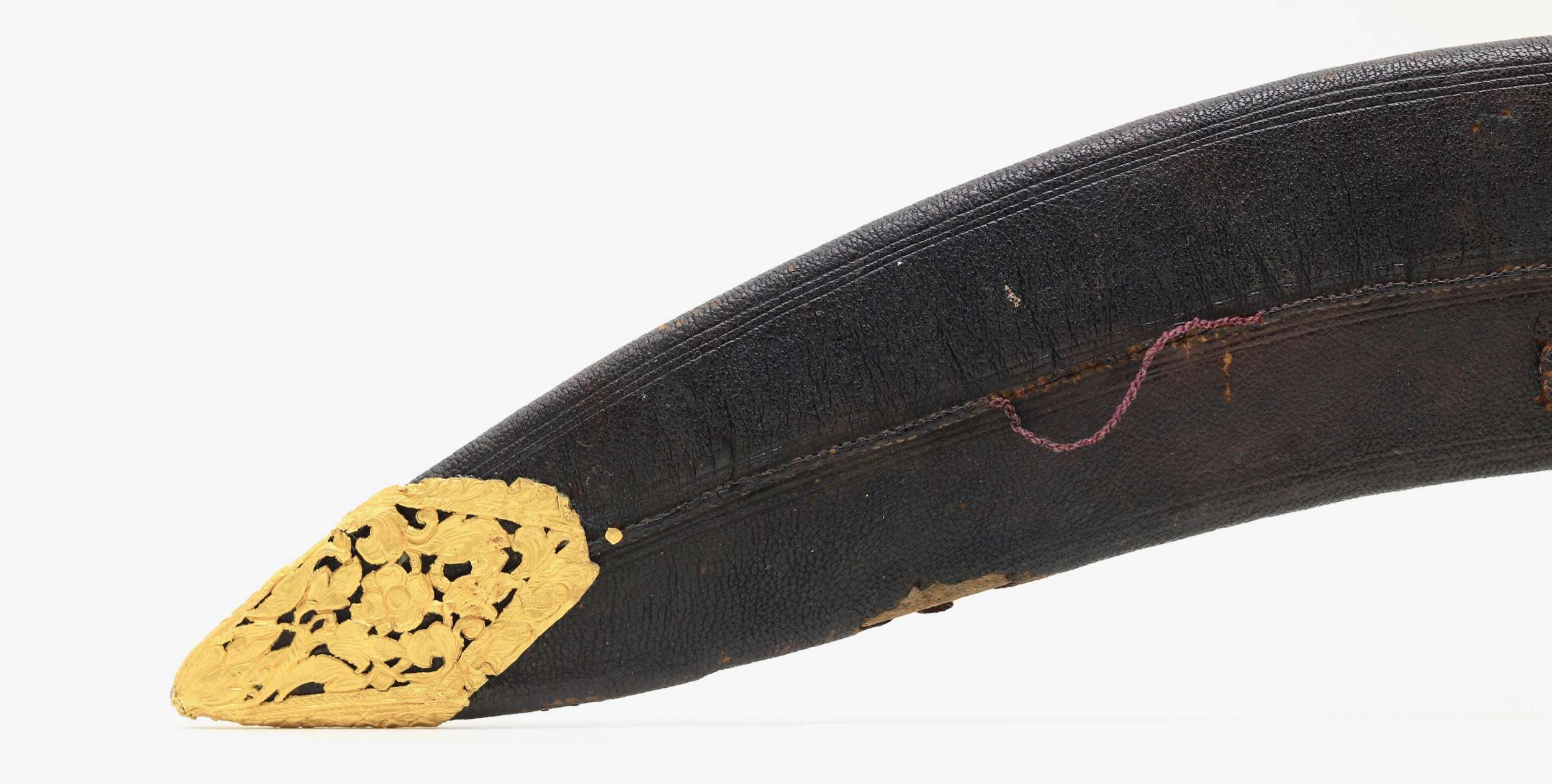 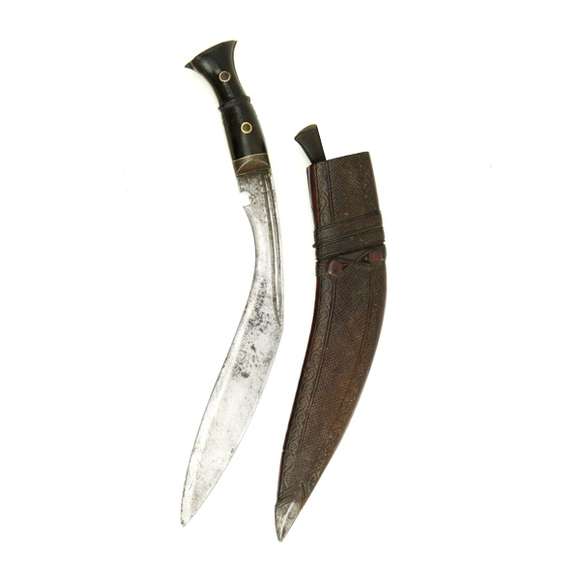 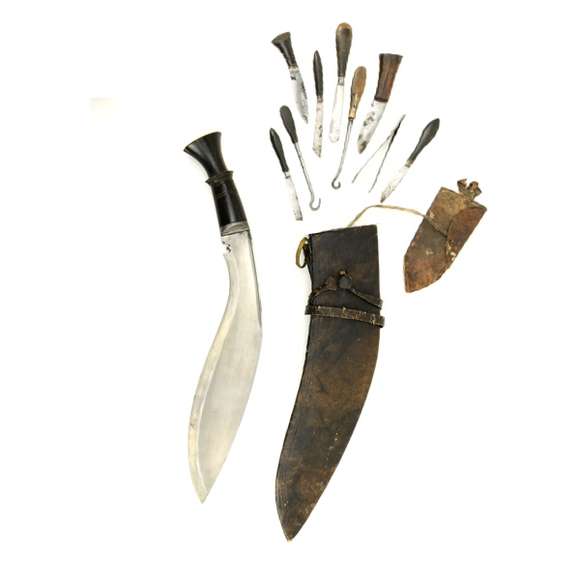 With wide blade and a two-tone hilt in cattle bone and wood, capped with brass. 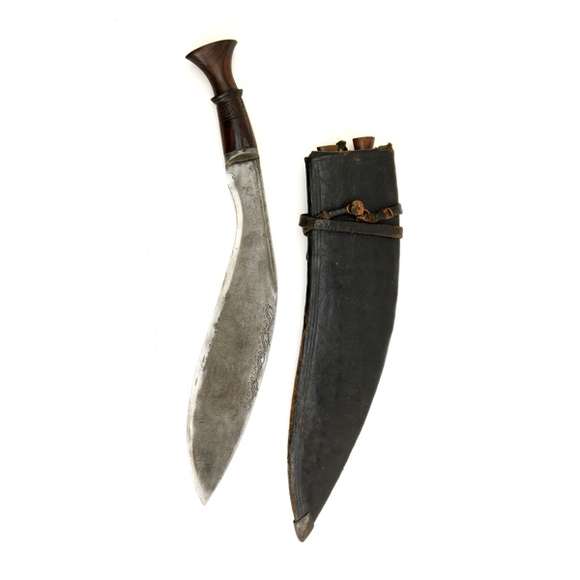 A 19th-century piece with a simple blade but nicely carved hilt.