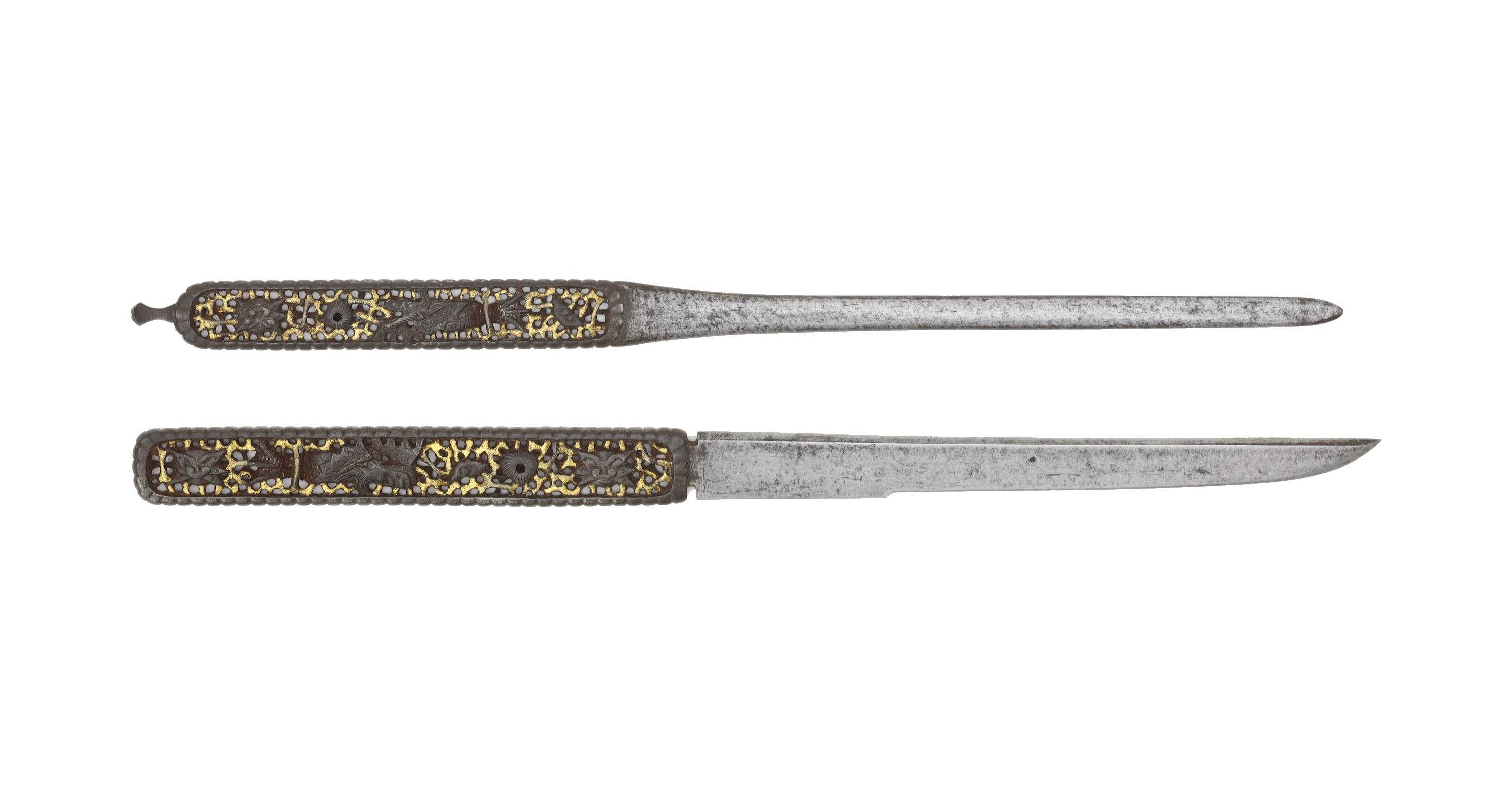 Japanese sword parts that exhibit foreign influence are today commonly classified as Nanban or "Southern barbarian" style. This is a catch-all classification for anything that shows a hint of foreign influence, up to pieces that are completely foreign. While the term is older, its use as such came to only in the early 20th century. This is an over-simplification because the genre can be split into many sub-categories, some made in Japan, others made outside of Japan.

Within the genre it is extremely rare to find anything that is not a sword guard. In this article, I present the only matching set of "nanban" kogai (笄) and kogatana (小刀) known to me in the world.

The kogai is a hairpin / ear scoop while the kogatana (小刀), often named just by its handle kozuka (小把) is a small utility knife. Both were carried in the scabbard of a Japanese sword. Together, such a matched pair is called futakoromono.

An extremely rare matched set of "Kanton style" kogai and kogatana. It was awarded Tokubetsu Hozon by the NBTHK, meaning it is deemed especially worthy of preservation. A high honor, rarely granted to nanban style material.

This style was inspired by so-called "Kanton-tsuba", Chinese sword guards from the royal workshops in Beijing that were traded through the port of Kanton, to Japan and enjoyed popularity there. It didn't take long before both maritime traders and Japanese makers themselves started to copy these designs on work of their own: The set compared to a Chinese sword guard of the type that served as an inspiration for this kind of work in Japan.
The Chinese guard also made it to Japan, you can see that a hole was cut through the design to accommodate the handle of a kozuka.

A Chinese imperial saber for which such guards were initially made.
Max Dreger collection. Auctioned in 1925. Other examples are in the Hermitage, St. Petersburg, Palace Museum, Beijing, and various private collections. 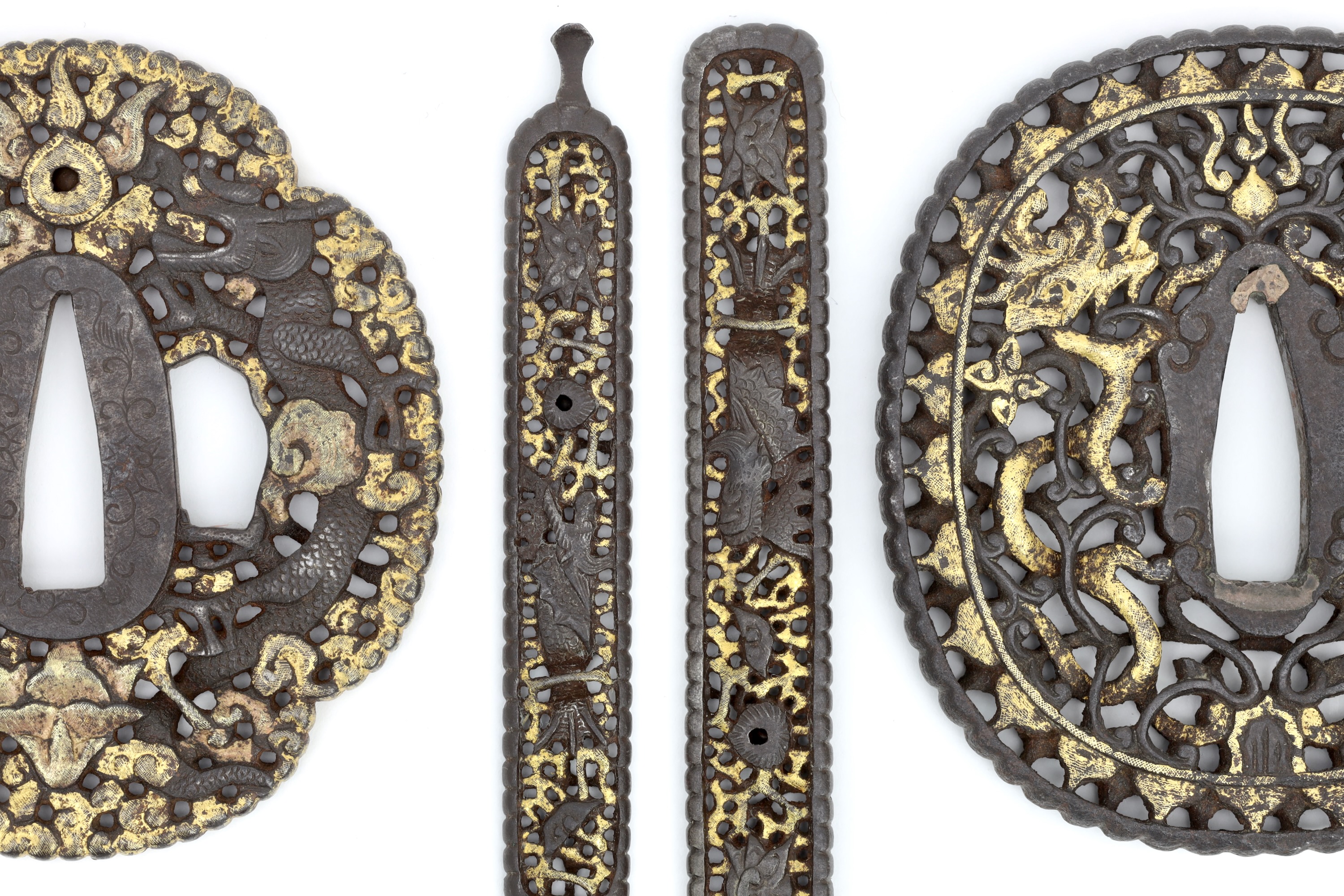 This set compared with a Japanese made "nanban tsuba", left.
And a Southern Chinese sword guard, right.
The work exceeds both in detail.

The elaborately pierced and chiseled handles on this set feature decoration including a dragon carp, sacred jewels, and water caltrop among tendrils with areas of undercutting. The sacred jewels on each piece are cut loose so they can move freely in their compartments. 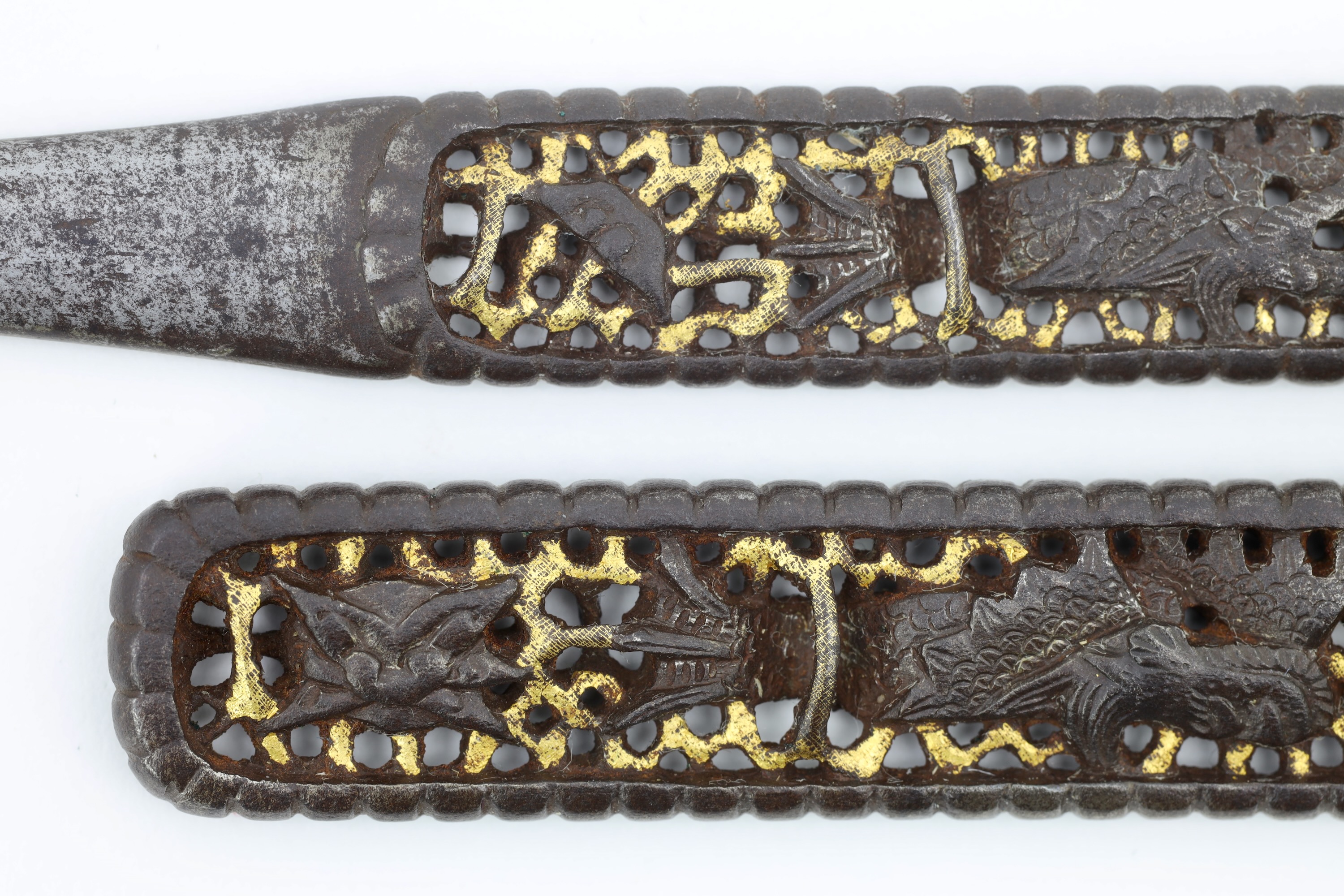 The kogatana knife and openwork handle are made of a single piece. Normally, the handle is a separate piece and the tang of the knife slides into it.

Edges of each handle are beaded, just like the edges of many Canton tsuba, which in turn take after purely Chinese designs imported into Japan from the 17th century onwards. The designs are carved on both front and back, but only the front sides are damascened in gold.

Per my current knowledge, this is the only such set in existence. I have been unable to find comparable sets in publications or museum collections.

An important set of matched set of "nanban" style kogai and kogatana. It was certified as Tokubetsu Hozon, or "Especially worthy of preservation", hard to obtain papers that are rarely given out to nanban style material.

It is possibly the only such set in the world. 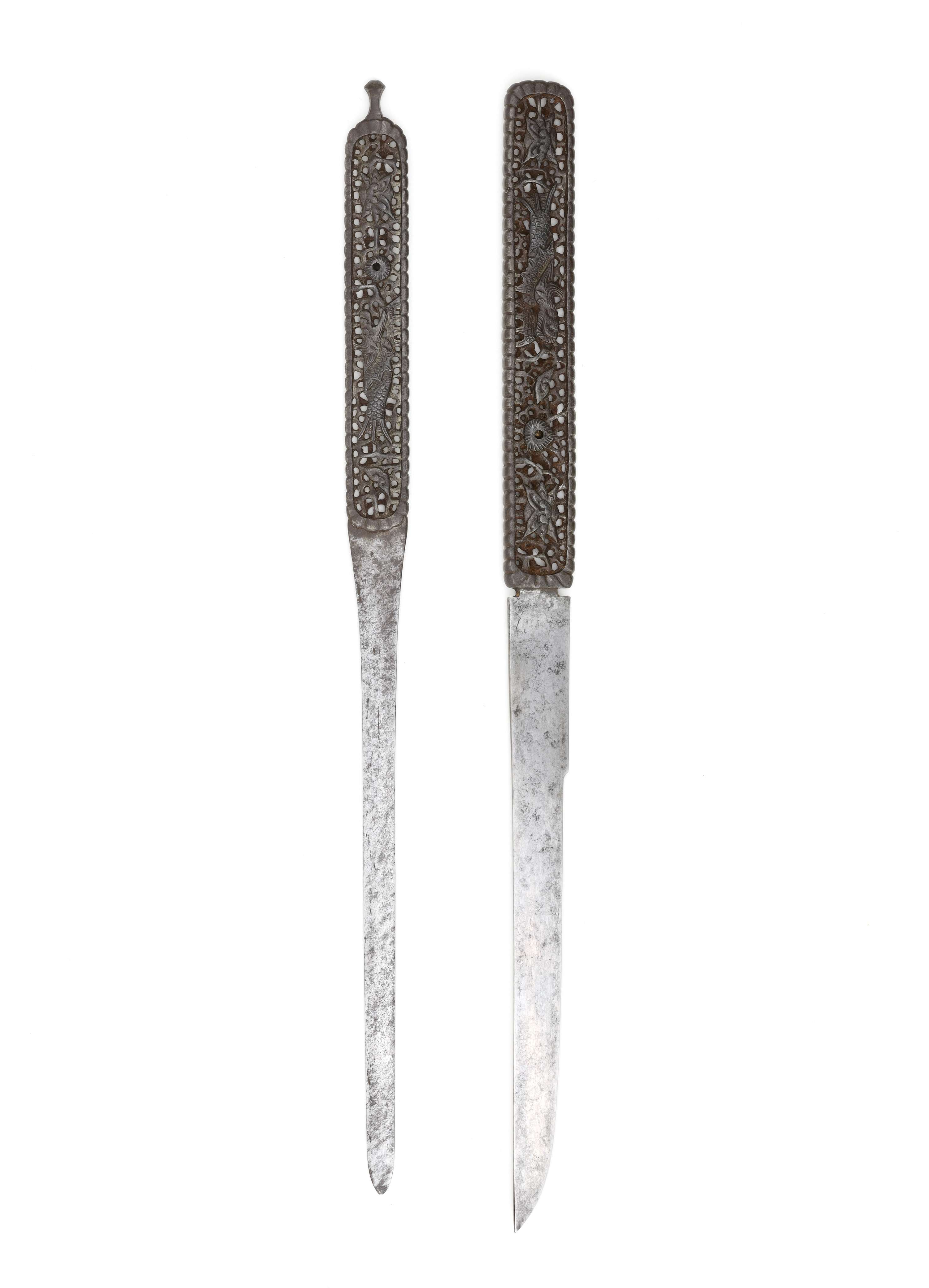 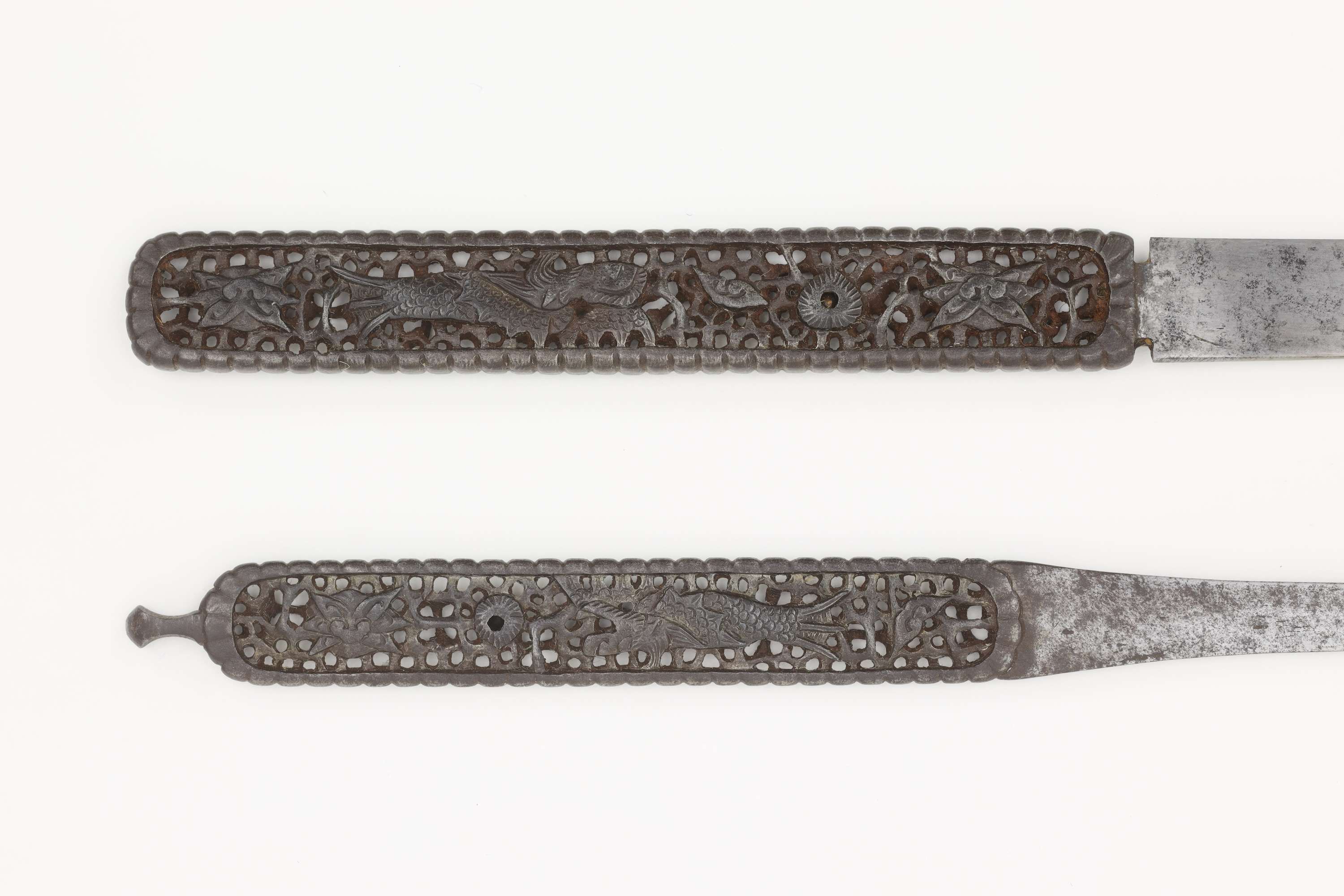 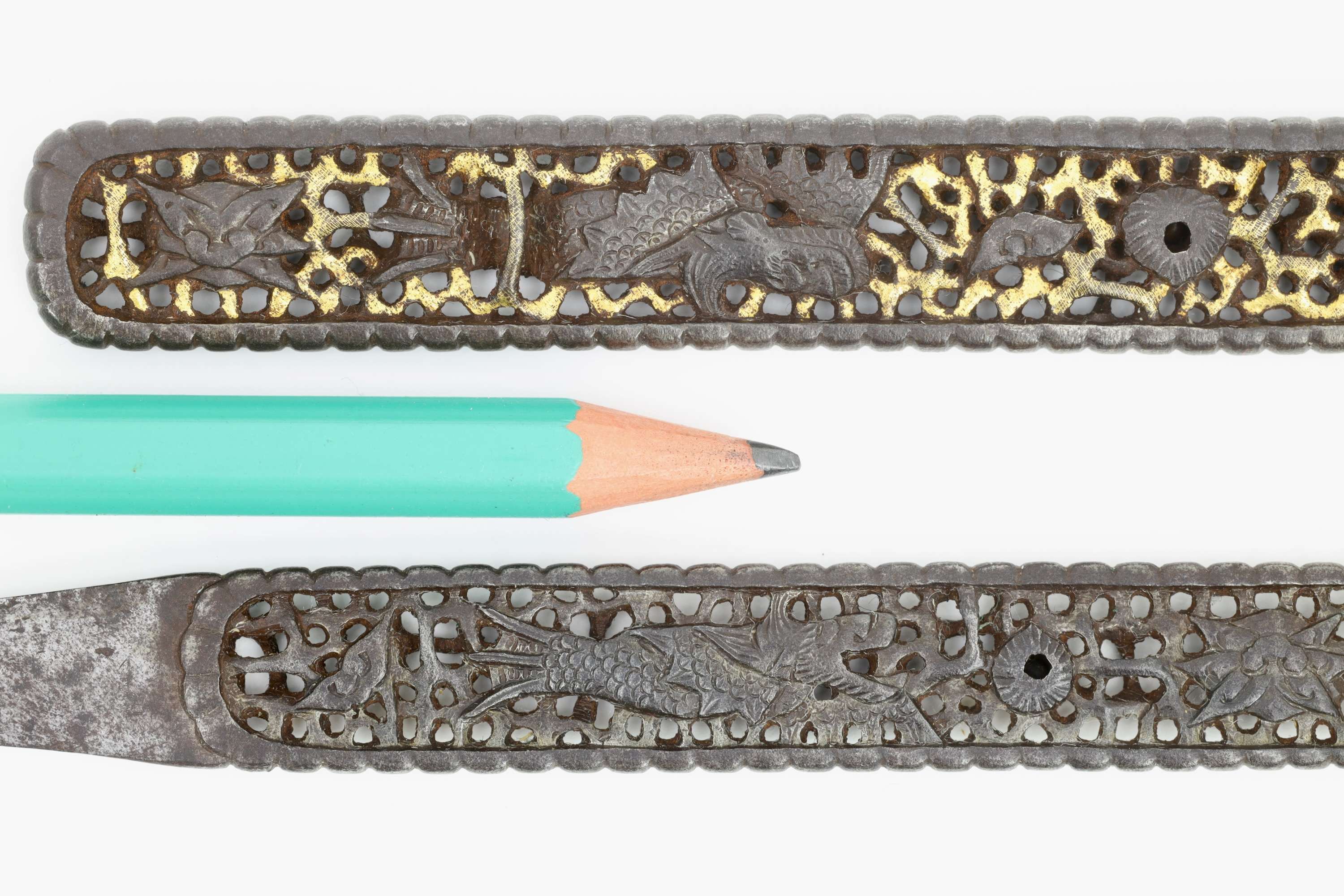 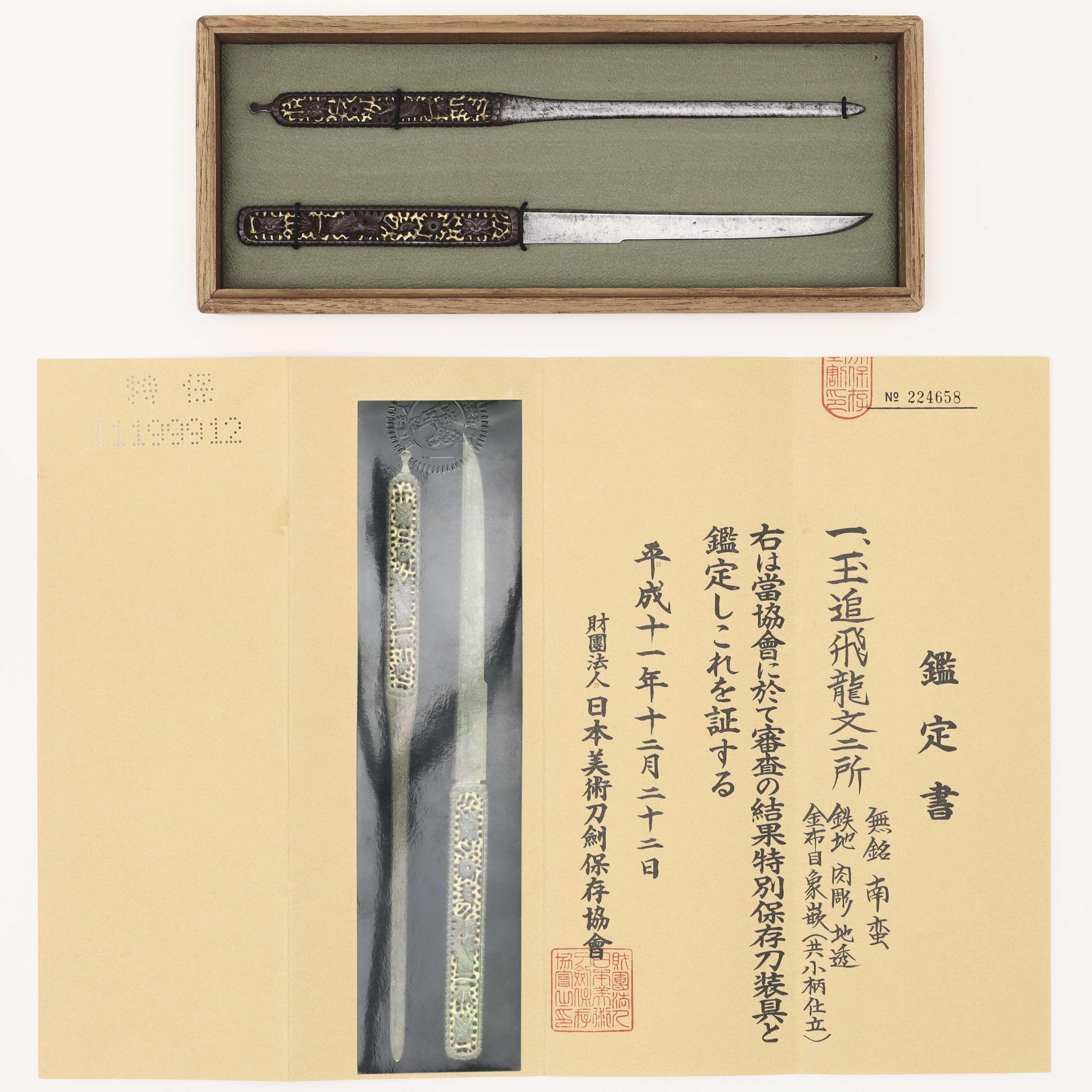 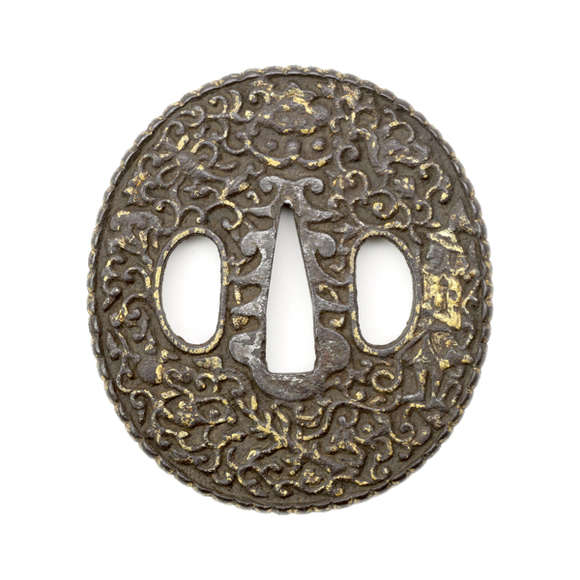