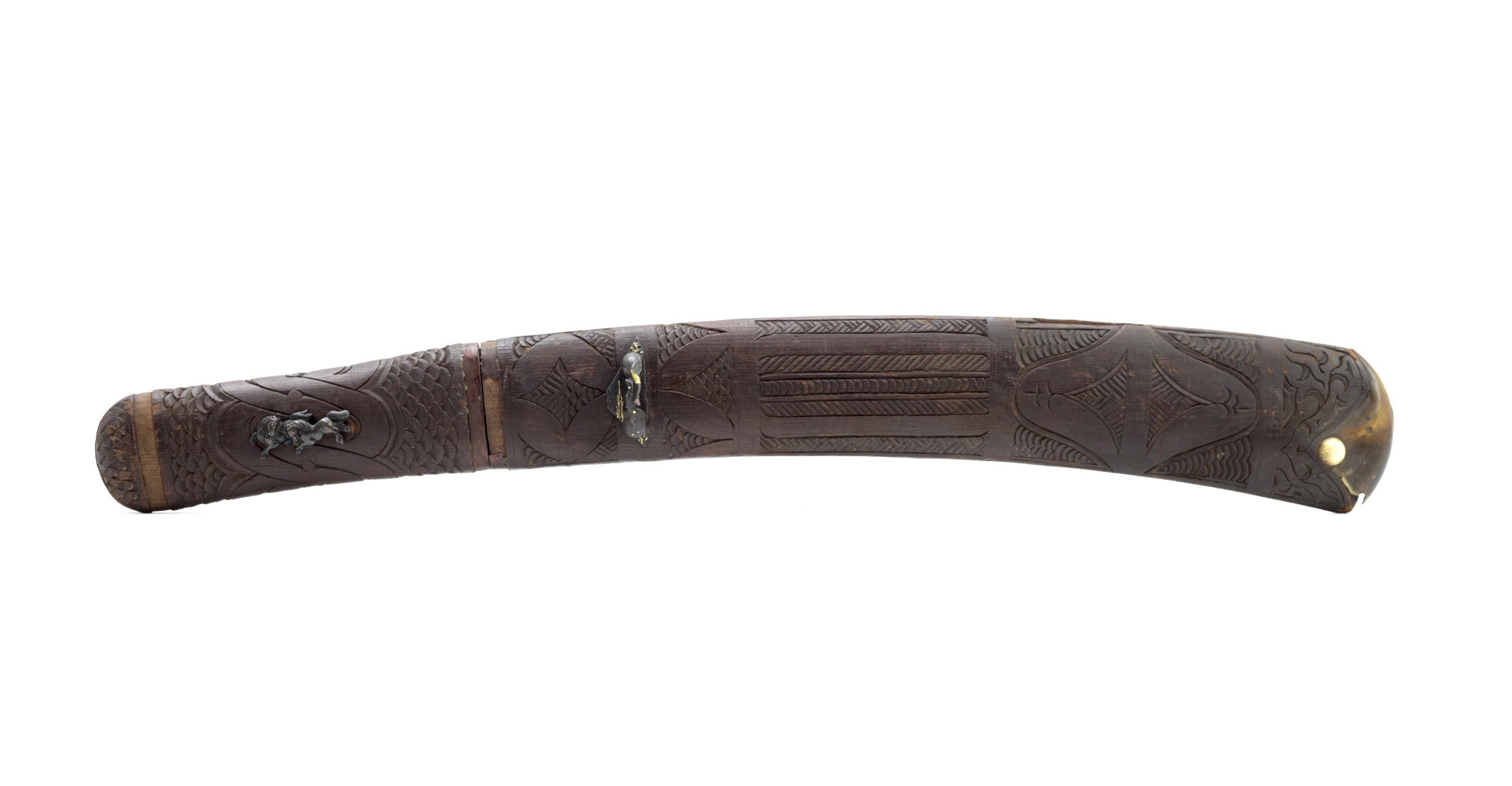 Quintessentially Ainu are the carvings on both hilt and scabbard, including carved fish scales and geometric designs typical for the Ainu living on the island of Hokkaido. The scabbard has a horn endpiece secured by two pins with antler domes.

Another Ainu feature not to be overlooked is the absence of a habaki, the soft metal collar pieces that Japanese swords and daggers always have as the base of the blade.

The blade is of laminated steel but more coarsely forged than normally seen on Japanese arms. An interesting feature is a grey band that follows the edge, which simulates the temperline found on Japanese swords. It was achieved by burnishing all but the band near the edge and was clearly a deliberate attempt to make the piece look more Japanese.

The two menuki are shaped like a pair of horses each, and the kurigata depicts a mountain while the loop is formed of two aubergines. The horses and one aubergine are made of prized shibuichi (四分一), a copper silver alloy that underwent a special patination process to obtain its current shade of dark green. The mountain and the other aubergine are made of blackened iron. All mounts have subtle golden details.

They show typical Japanese workmanship and were undoubtedly made by a professional Japanese fitting maker, and one of considerable skill. They were probably obtained through trade by a wealthy and well-connected Ainu, like a local chieftain.

The kurigata depicts Mount Yōtei, a stratovolcano situated on Hokkaido, as it is seen from the east, where it looks like it has three distinct peaks, the middle of which is rounded.

"A long time ago, before this world existed, only the top of Mt. Yotei appeared above the vast ocean; Kotan-kar Kamui together with his sister goddess "descended" to the top of Mt. Yotei and made the earth by filling up the ocean with clouds ..... When Kotan-kar Kamui wanted to make the first human, he sent a sparrow as his messenger and asked the Master of the Heaven what to make it of. The Master of the Heaven said: "Make it out of wood." In this way humans were made out of wood, and therefore they will not live eternally." 1

Some damage to the relatively soft wood used and losses to the peach bark wrappings. The hollow bamboo peg (mekugi) that secured the blade and holds both menuki was in bad shape, so I replaced it with a new one. One corner of the scabbard endpiece is damaged. See photos.

I decided to keep it in original condition, as I prefer tribal items like that myself.

This piece was probably a one-off, specially commissioned piece for a wealthy Ainu. As such, there are no direct comparables to be found.

There is a larger, o-tanto style piece in the Minneapolis Institute of Art. It has an associated sword sash that I think came from a full sized Ainu sword. This piece was likely carried in a belt, as suggested by the presence of a kurigata like on our piece. Accession number: 2019.20.11a, b.

However, the nature of the carving is comparable to that found on pieces collected from Hokkaido by John Andersen , which he presented to the British Museum in 1885. One scabbard from Chitose (As1885,1219.2) shows knot work on a fish scale background as found on our hilt. A dish from Uiikawa also shows similarities in the design and the background (As1885,1219.4) to what is found on this scabbard.

These comparables and the depiction of Mount Yōtei suggest Hokkaido origin of this piece. 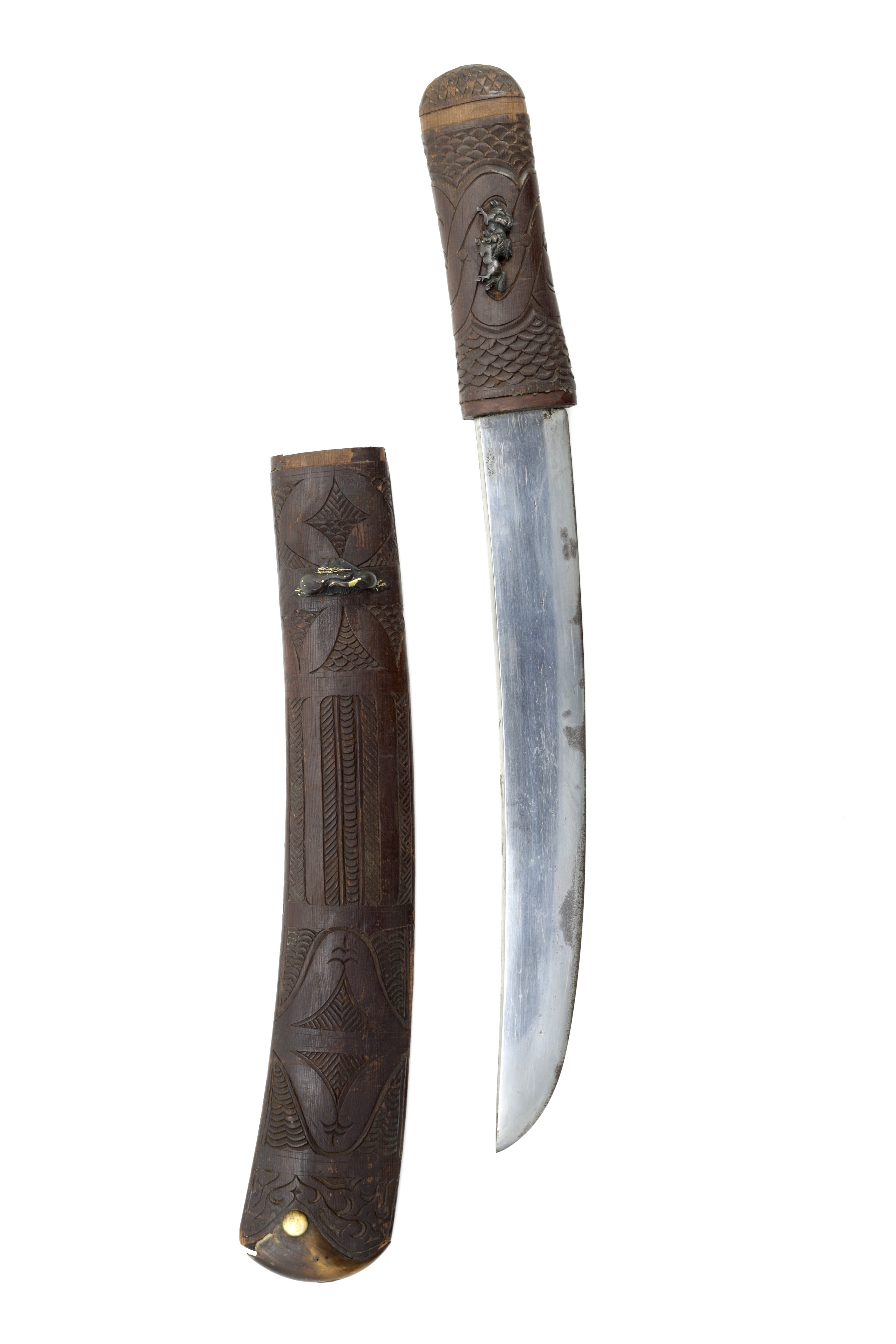 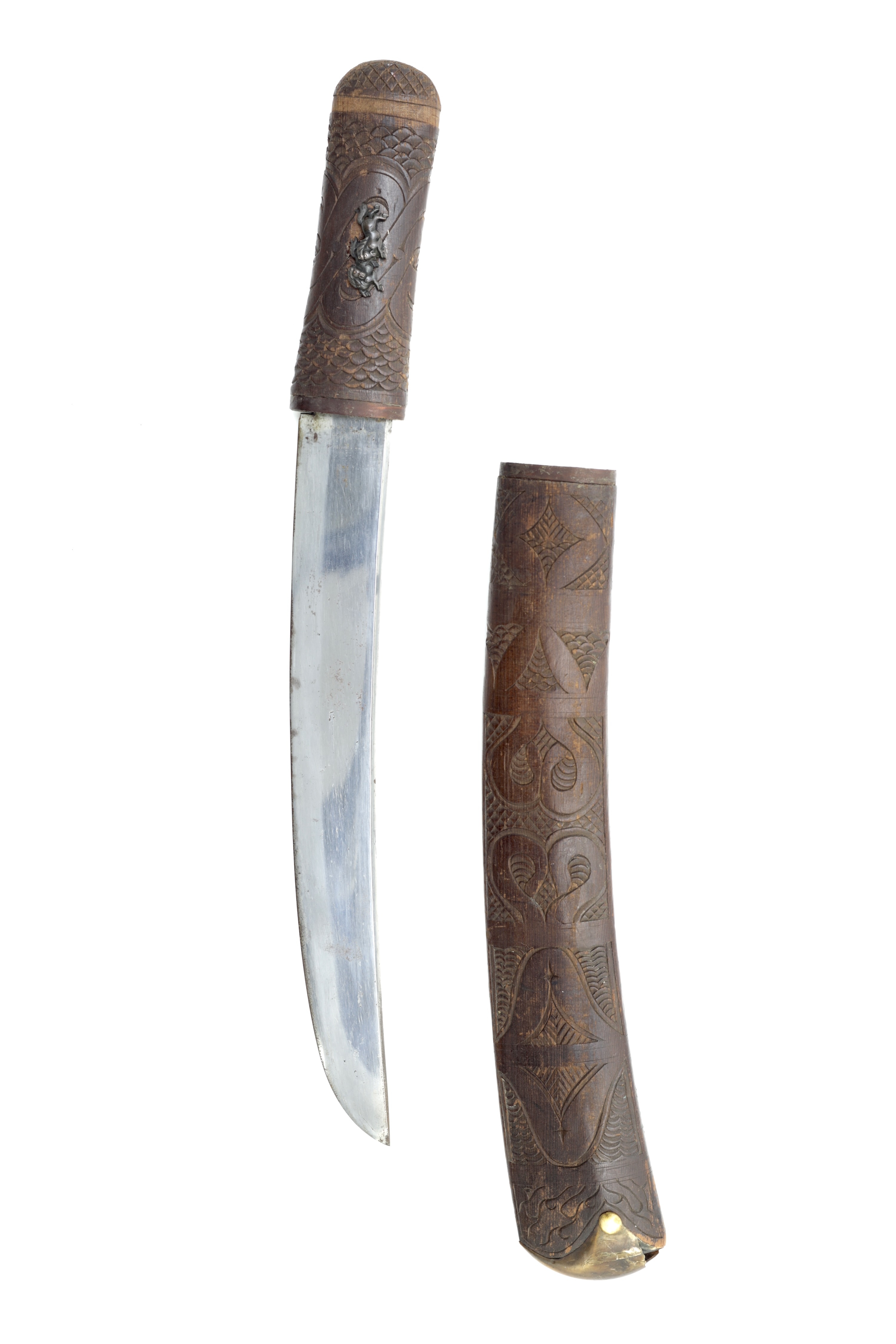 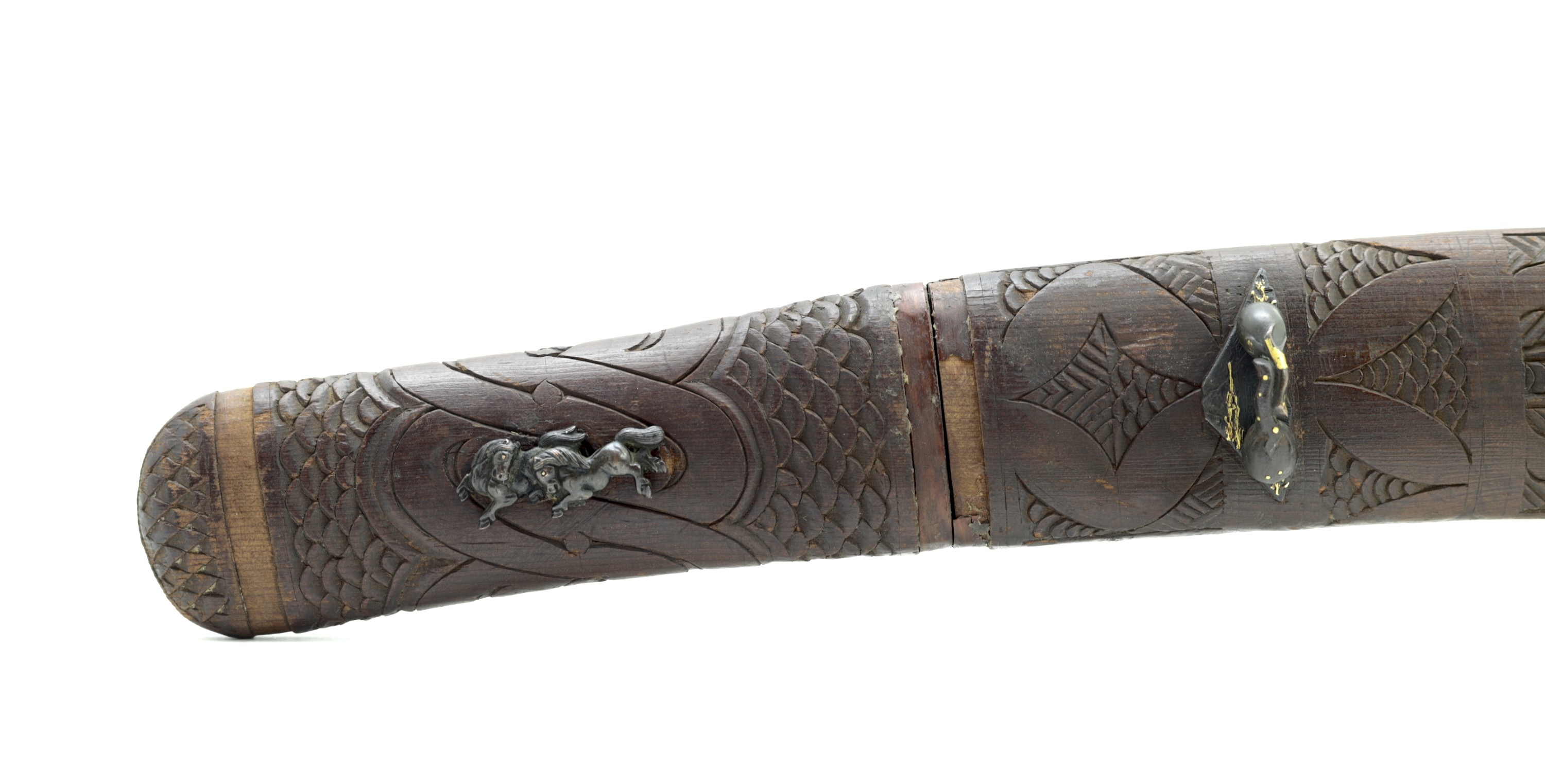 The very detailed mountings are decorated with designs of Japanese spiny lobsters.