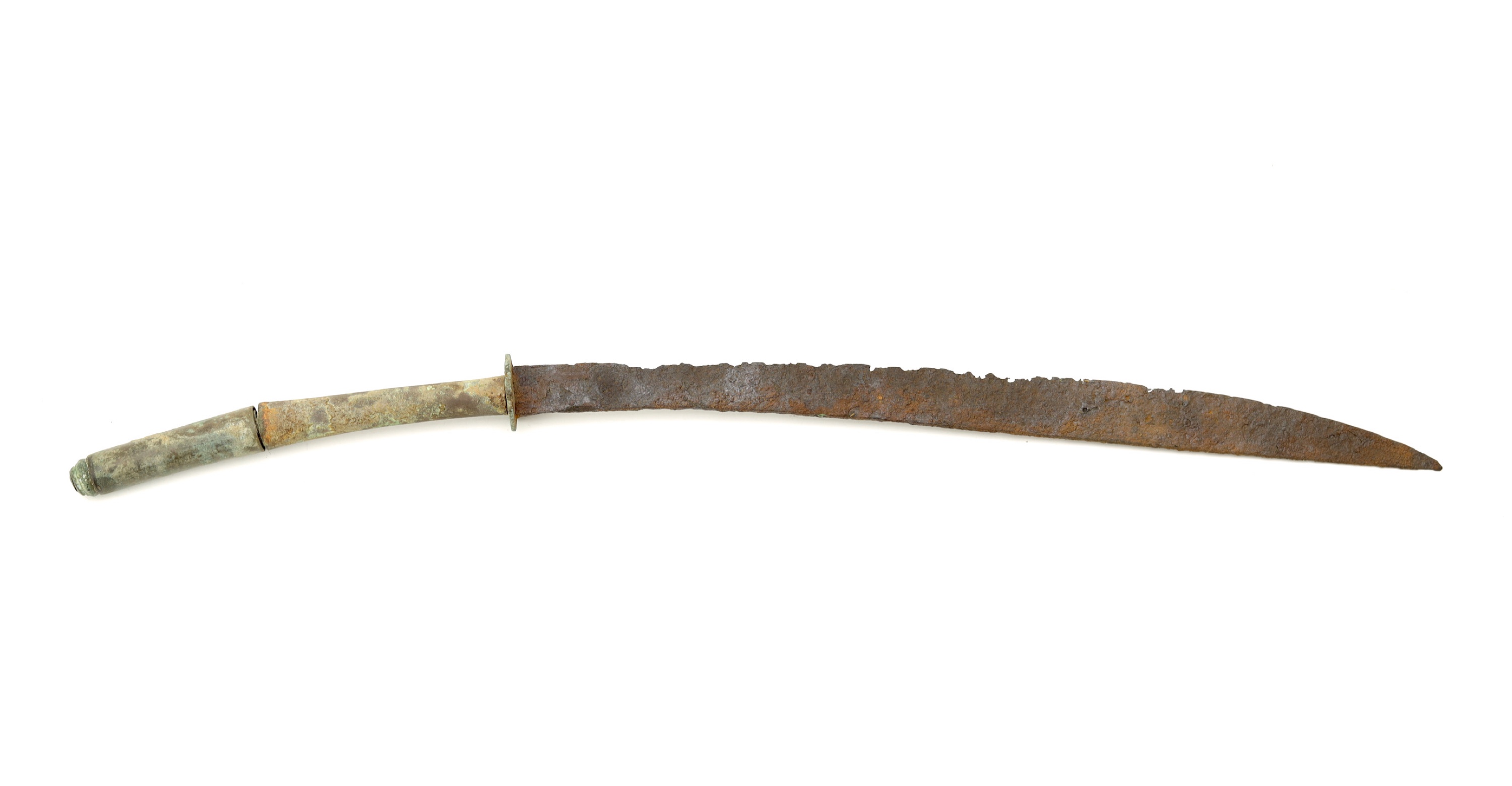 This sword is of a type of which several circulate on the market, and a few are found in museums. While some are definitely genuine, a number of them seem questionable. So far most are classified as Khmer, which could refer to an ethnic group or the empire that lasted from 802 AD to 1431 AD. Few have any decorative features that allow for accurate dating.

With most, only metals remain but in this case, the hilt contained slivers of wood so I sent them for carbon dating. See the results below.

The blade has a moderate curvature, bending away from the hilt at the base and then straightening somewhat, forming its broadest at the center of percussion before narrowing down to a sharp point. The blade is very thick at the base, tapering gradually towards the tip.

It has an eight-lobed disc guard, inspired by similar Japanese sword guards that made it to the region from at least the 16th century onwards.

The hilt consists of two cylindrical pieces of brass with a joint about 3/5th of its length towards the pommel. The pommel is peened over what was perhaps once a full-tang construction, if so that is unusual for dha and more in line with Chinese sword-making traditions.

Inside the hilt are slivers of wood, some fiber, a copper alloy sheet, and some more recent paper that was inserted to keep it somewhat together.

Excavated condition. Blade heavily corroded. Brass is in decent condition, with no significant losses to the hilt. See photos.

I sent the piece out for both X-ray fluorescence (XRF) and radiocarbon dating. XRF is a non-destructive method to determine the composition of a material by exposing it to high-energy gamma rays, after which it briefly emits fluorescent X-rays peculiar to each element. Older materials are not as homogenous as modern materials, so you can expect to get a slightly different reading at each spot of a single piece. Elements lighter than magnesium cannot be measured using XRF, so unfortunately it cannot detect the levels of carbon in the iron.

It is interesting to see how much the composition of the alloys differ per piece, indicating perhaps a production line where different parts came from different batches or sources. The somewhat erratic compositions are also indicative of traditional manufacture. Modern materials tend to be more homogenous in composition.

A piece of old wood deep into the guard side hilt sleeve was prepared for carbon dating. It gave the following results:

This coincides with the proposed dating of a group of swords in the History Museum, Hue, Central Vietnam, photographed by Gary Todd which are dated to the Tây Sơn dynasty of 1778–1802. These swords are not an exact match, having shorter hilts, different blade styles, but there are similarities in construction and guard styles.

Update, 23 February 2022
In conversations with collector Iain Normal he pointed out how many of these in local museums seem to be attributed to the Battle of Rạch Gầm-Xoài Mút. It was fought between the Vietnamese Tây Sơn forces and an army of Siam in present-day Tiền Giang Province  in the Meikong river delta in the south of Vietnam on January 20, 1785.

It resulted in a decisive Tây Sơn victory, with an estimated 40.000 killed on the Siamese side, and their entiry navy destroyed. Today, treasure hunters still dredge and dig up swords from this battle, and it seems likely that the ones on the market -including this one- can be dated back to that event.

I find it quite exciting to finally have some data on at least one of these. I hope the results help fellow researchers and enthusiasts in their further study of older Southeast Asian swords.

One peculiar aspect about the group of swords that this piece belongs to is that all are found in excavated condition. A question that begs for an answer is why so many of these got buried in the ground, as one would think that when not needed their raw materials still represented value.

Possible explanations are they:
-Buried them with the intent to artificially age them
-To hide them from authorities, like the Khmer Rouge in Cambodia who would have surely confiscated them
-As part of a religious rite or custom

And of course, we can't simply rule out plain neglect and/or a natural event.

I hope information will surface in time that helps narrow down the possibilities. 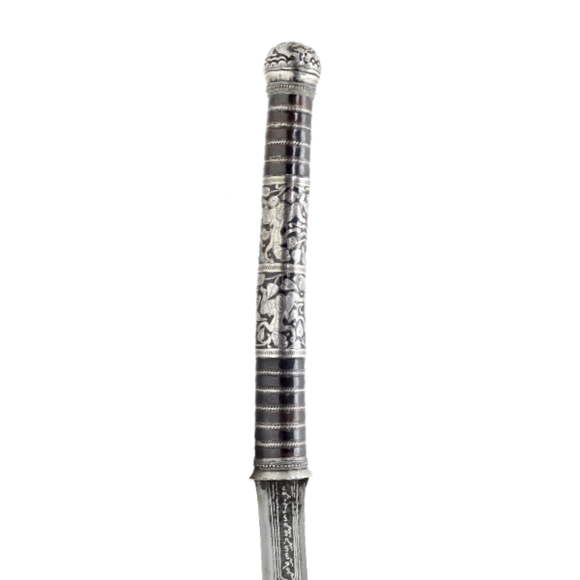