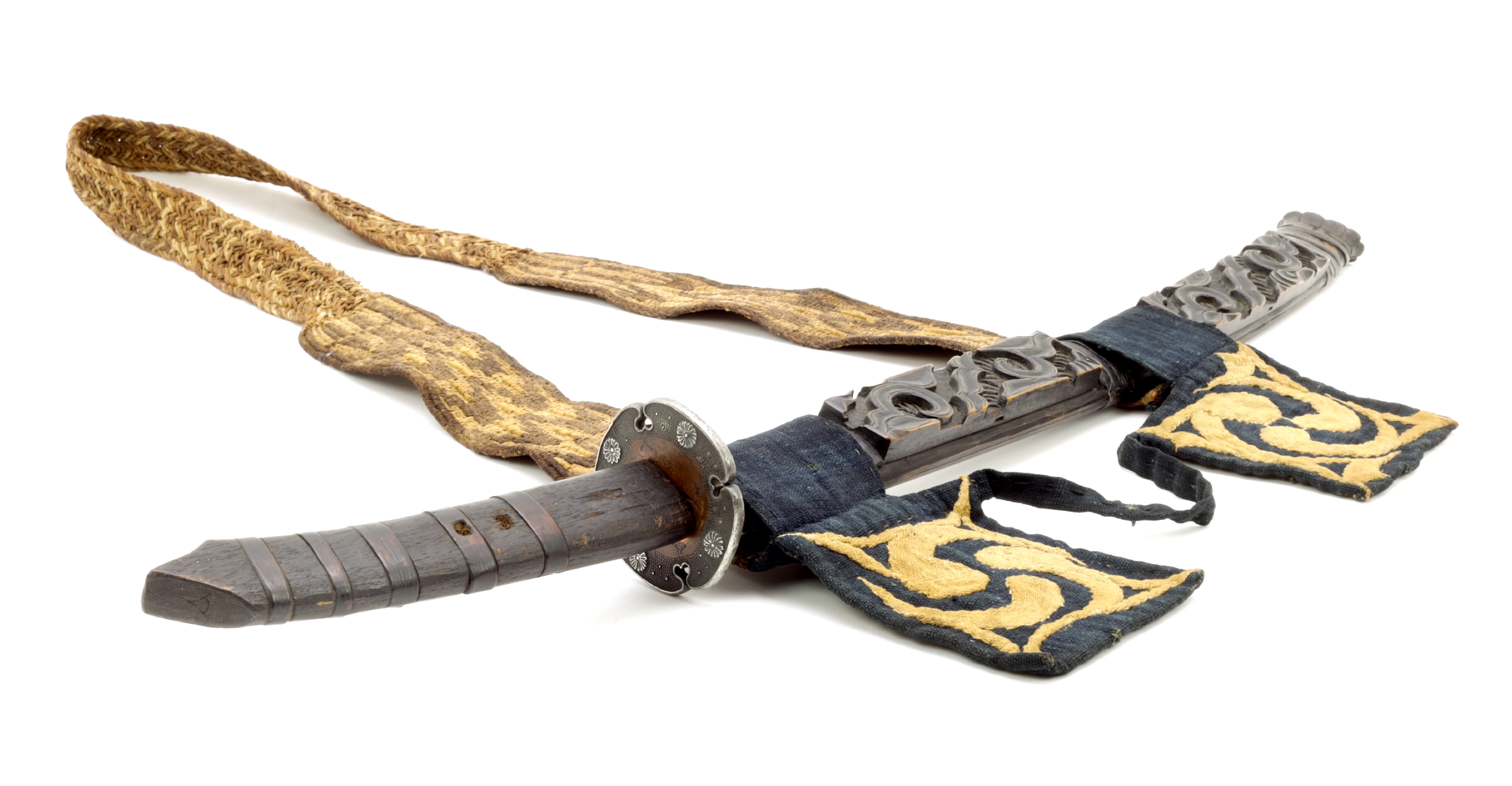 Scabbard could be 17th century

The Ainu people are early settlers of Hokkaido, the northernmost island of the Japanese archipelago, and are considered the indigenous people of this area.

Their swords are called emushi, and steel swords were, according to ethnographers, primarily used during ceremonies for expelling evil.1 The older the sword, the more powerful it was, and so many wealthier Ainu families kept collections of older swords. One of the earliest references to Ainu swords is from 1643, when Maerten Gerritszoon Vries observed an Ainu man with a sword with silver inlaid blade. He also saw that they hung the sword of a respectable deceased over his grave.2 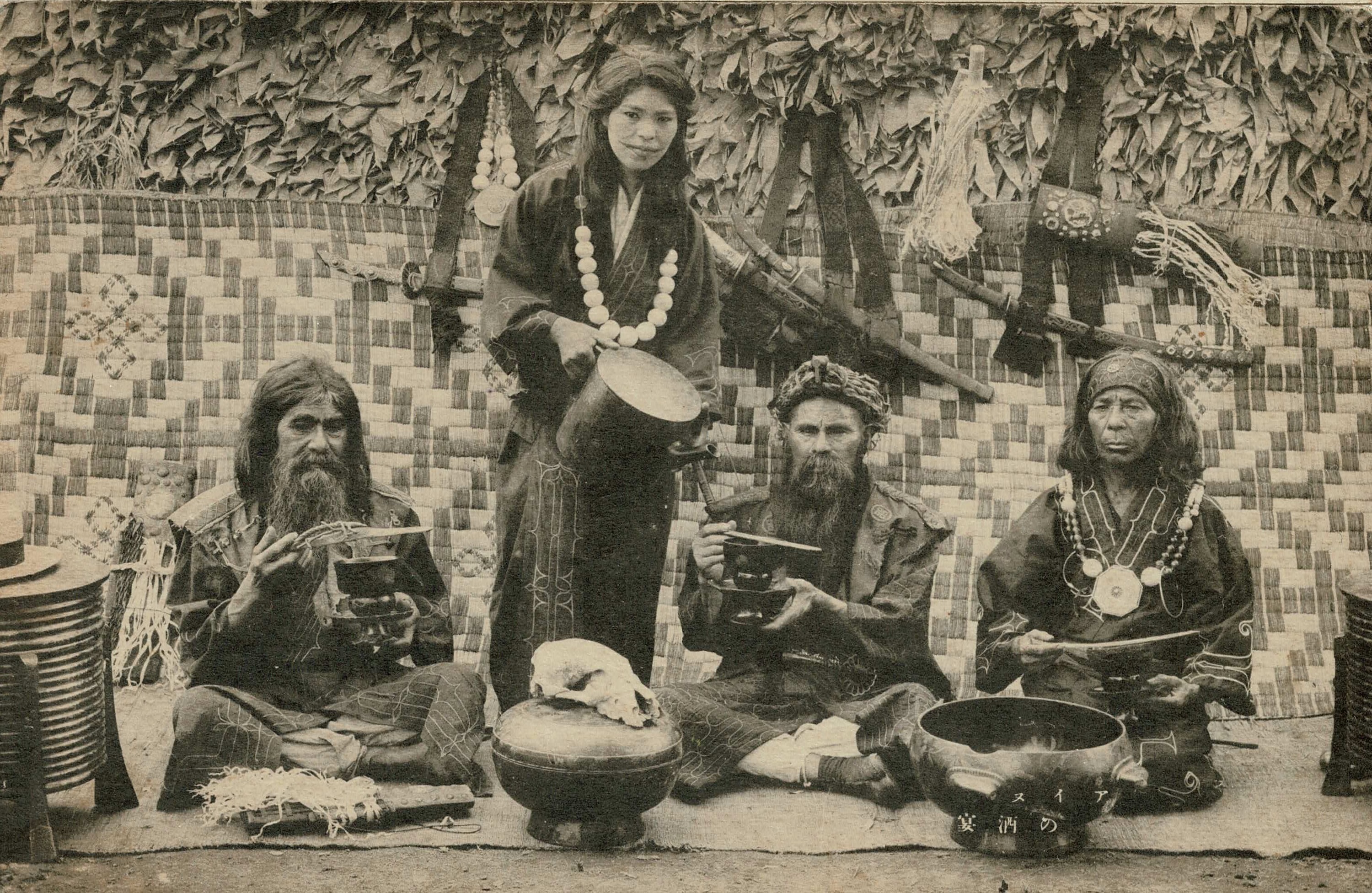 Ainu and their swords in the background, on an old Japanese postcard.
Author's collection.

I'm pleased to present in this article an extremely rare find in the form of a nearly complete Ainu sword that retains its emush-at, the striking sash that it was carried with.

The blade is short, and single-edged, resembling a Japanese sword but not constructed as one expects from Japanese work. Typical for Ainu is the absence of a habaki, the collar piece that is always present on Japanese blades.

The construction of the hilt is entirely ceremonial. The sword tang is a perfect fit in the hilt, but nothing holds the blade in place. Same for the guard and its washer, which easily slide over the blade's tip with nothing to secure them in place. I was puzzled about this at first, but following an Ainu revolt against the local Matsumae rulers in 1669-1672, steel weapons became forbidden, and many were confiscated. Local iron and steel production was seized, and bans were observed throughout the 18th and 19th centuries.1 The construction of this sword was probably a way to be still able to carry a sword legally as it was rendered useless for actual fighting. The long channel in the scabbard suggests it once held a long, actual sword and therefore the scabbard may well be quite old.

The hilt is wrapped with cherry bark bands to reinforce it. Some holes suggest there were once ornaments, now gone.

Notes
1. Yuriko Fukasawa; Ainu archaeology as ethnohistory; Iron technology among the Saru Ainu of Hokkaido in the 17th century. Pages 48-49.

The guard resembles Japanese work but is a little coarser in its manufacture and with a different shape tang opening. It is said that Ainu did not work metals, but I am seeing metalwork on Ainu pieces of which the style and workmanship differs significantly from typical Japanese work. These pieces were either made specifically for the Ainu, or perhaps made by Ainu metalworkers after all.

The guard is made in aoi-gata (葵形), literally "hollyhock shape", a style typically used for Japanese tachi swords that were worn edge downwards, like this Ainu sword. 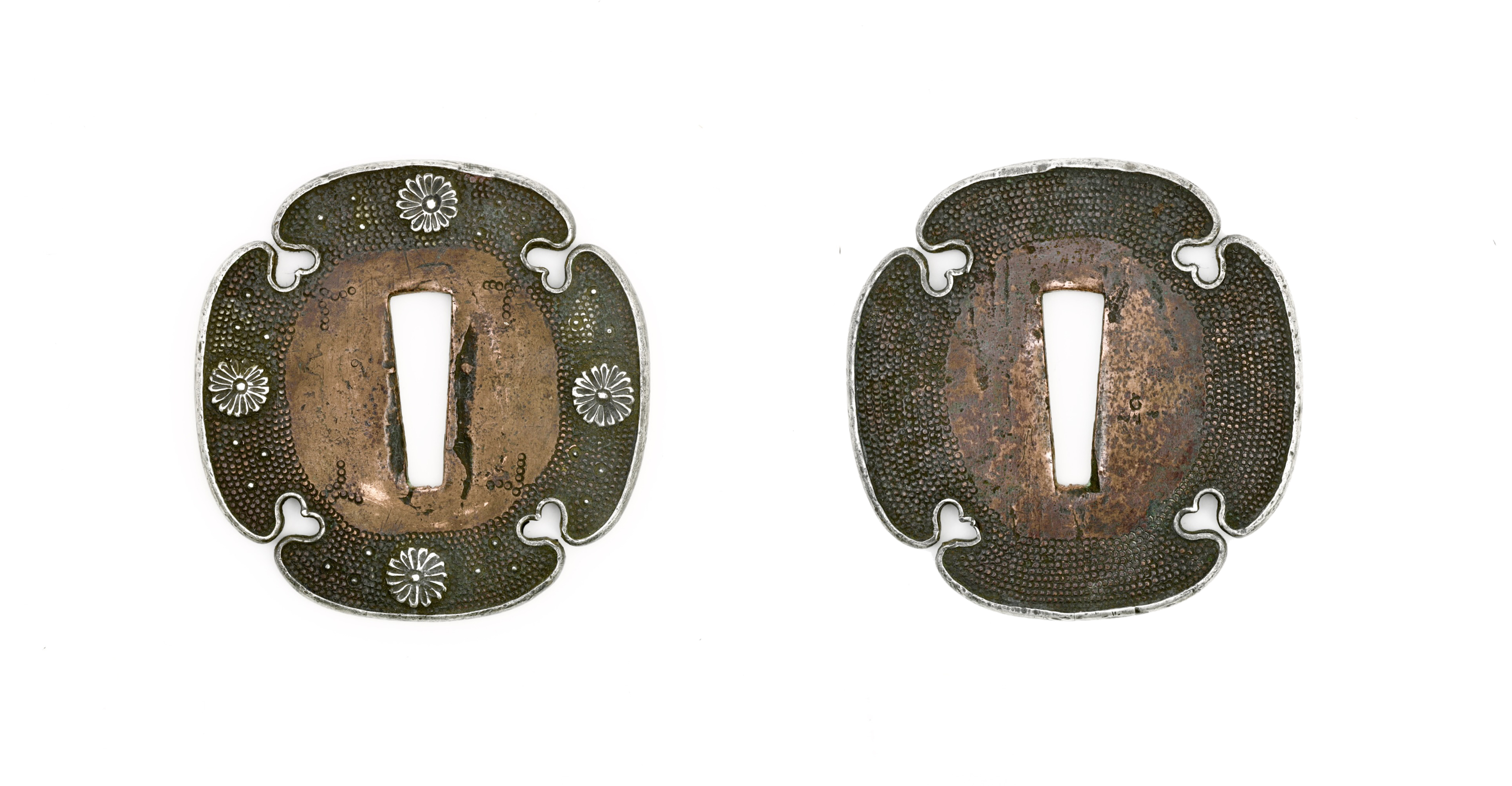 It is made of copper, decorated with punch work and with overlays of silver in the form of dots and four chrysanthemums on the facing side. The chrysanthemum has been the imperial seal of Japan since the 12th century but is always depicted with 16 petals. Here, we see two that have 15 and two that have 17 petals, showing a certain degree of naivety. The guard also has a silver rim.

The scabbard is made of two halves, glued and bound together with cherry bark. A separate carved scabbard endpiece is secured with a peg.

It has two deeply cut blocks on the facing side, exhibiting the highest relief I've seen on Ainu work to date. It is stylistically beautiful and executed with great skill.

The sashes that were used to carry or hang these swords with are called emush-at. They rarely survive, and before owning this sword, I only knew them from museum collections.

This particular example is beautifully made with a plaited plant fiber belt and two squares of indigo dyed cotton with embroidery of mitsudomoe. The mitsudomoe was very popular among the Ainu. In Japanese culture, it is closely related to Hachiman, the God of archery and war. It also featured in the heraldry of several Samurai family crests. It is perhaps best known as the royal emblem of the Ryukyu Kingdom  which lasted from 1429 to 1879. The mitsudomoe was adopted by king Shō Toku who ruled from 1461-1469.

Interestingly, a 2012 survey found that the Ryukyuan people are the closest genetic match to the Ainu.1 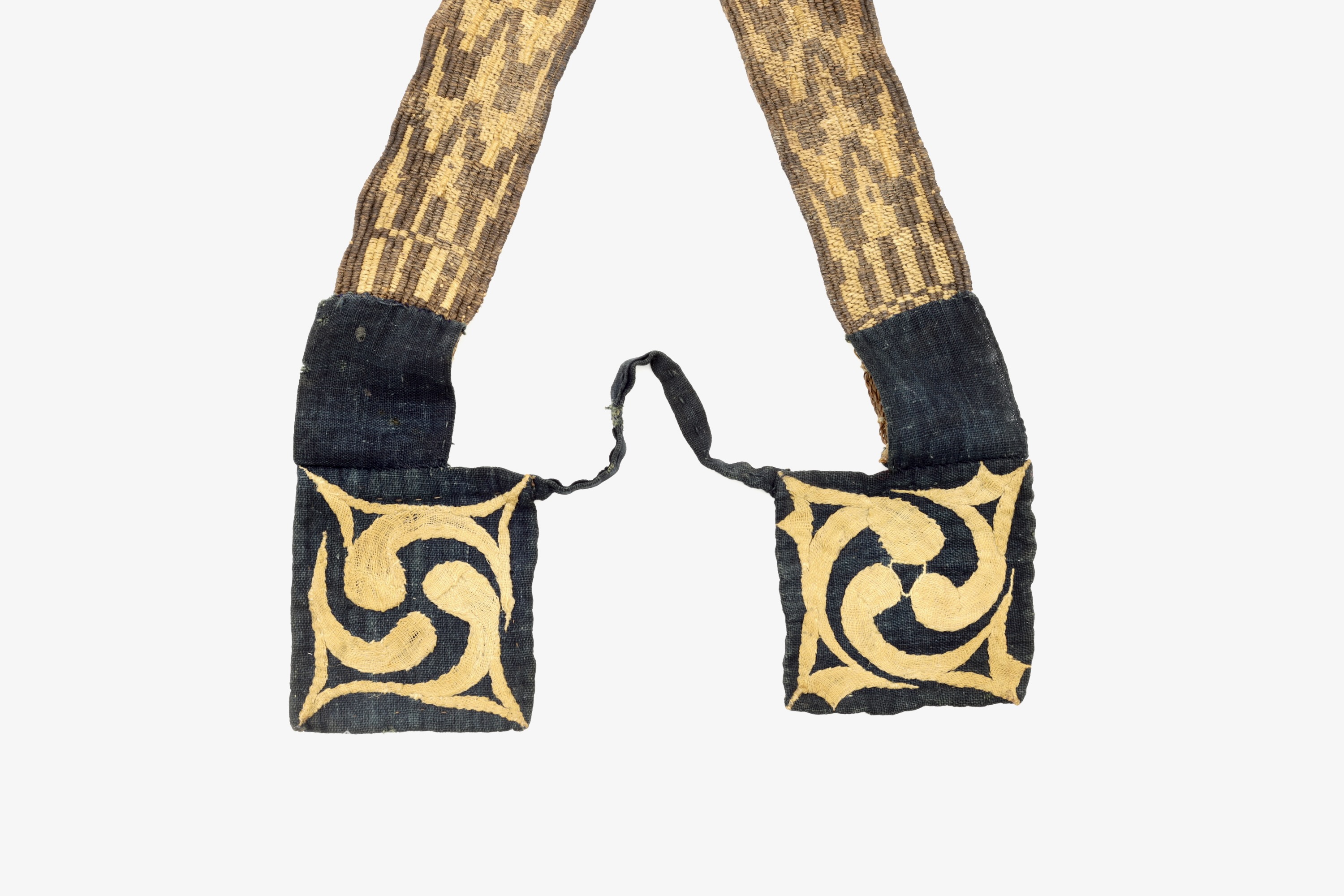 On both sides of the triangular end of the hilt is a marking resembling a capital letter A. These marks are typical for the Ainu of Hokkaido and resemble bird footprints.1 They are a symbol of Kandakoro Kamuy, the sky God and prime originator of all things in the Ainu world view.

Notes
1. Moses Osamu Baba; Iku-Nishi of the Saghalien Ainu. The Journal of the Royal Anthropological Institute of Great Britain and Ireland, Vol. 79, No. 1/2, 1949.

Very good condition for an Ainu sword. They were usually in a poor state already when encountered by ethnographers or seen in use by the culture on old black and white photographs. Some losses to scabbard wood and instances of bark being glued back on. Some missing ornaments from the hilt. A partially loose seam on the sash. See photos.

There is a nice and complete Ainu sword in the Penn Museum, accession number A469B. It has a similarly short-ish blade and, like ours here, no means of securing blade and guard. It was a gift from the American explorer and ethnographer Dr. Hiram M. Hiller, who presented it to the museum in 1901 after obtaining them earlier that year in an expedition to Hokkaido. The sword came from the region around the Okotsunai river in the southwestern part of the island.

Another Ainu sword with a sash, but missing its guard is in the Ethnographic Museum in Leiden and is currently part of an exhibition. It can be found under accession number RV-3603-25. It was purchased by the museum in 1959. 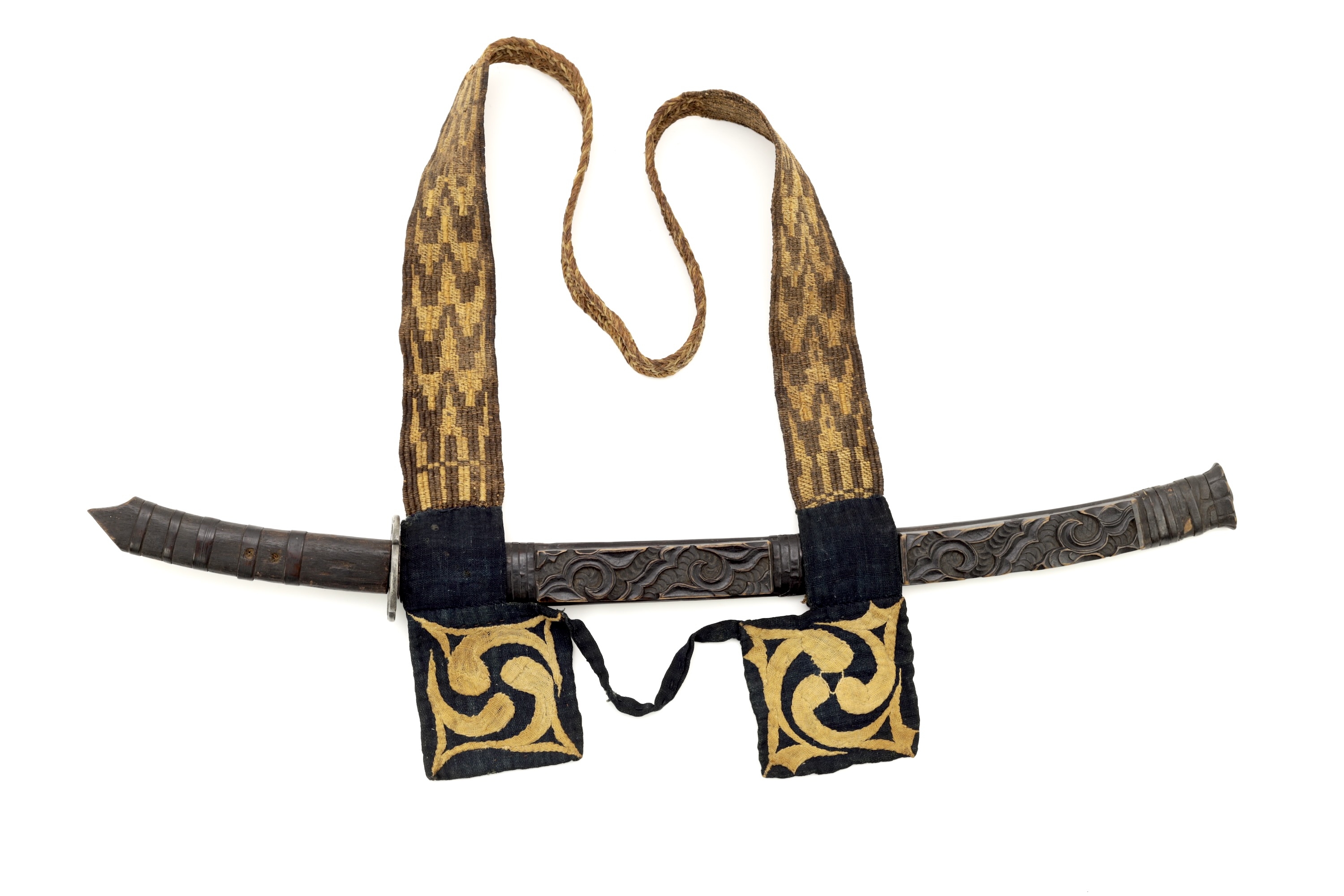 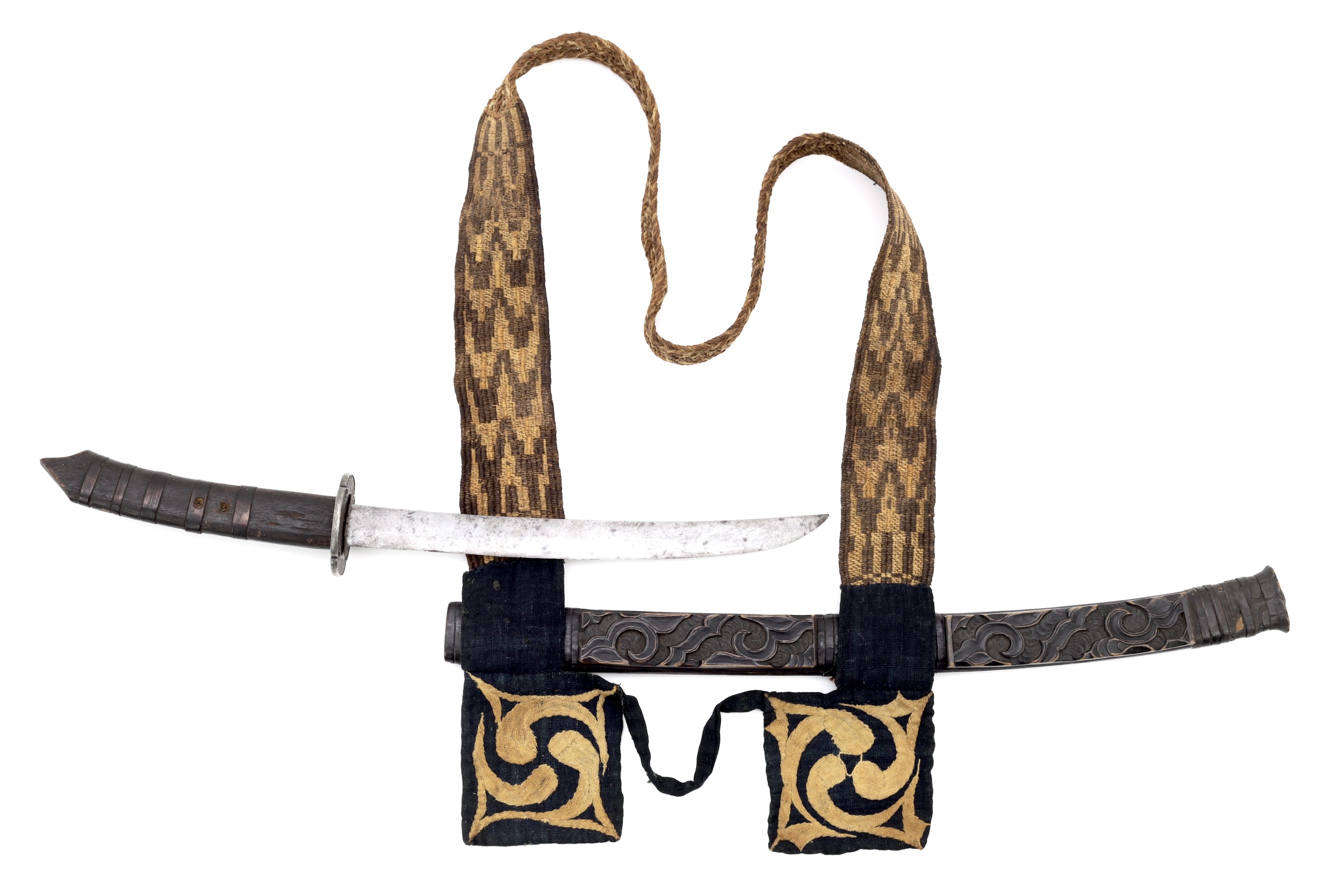 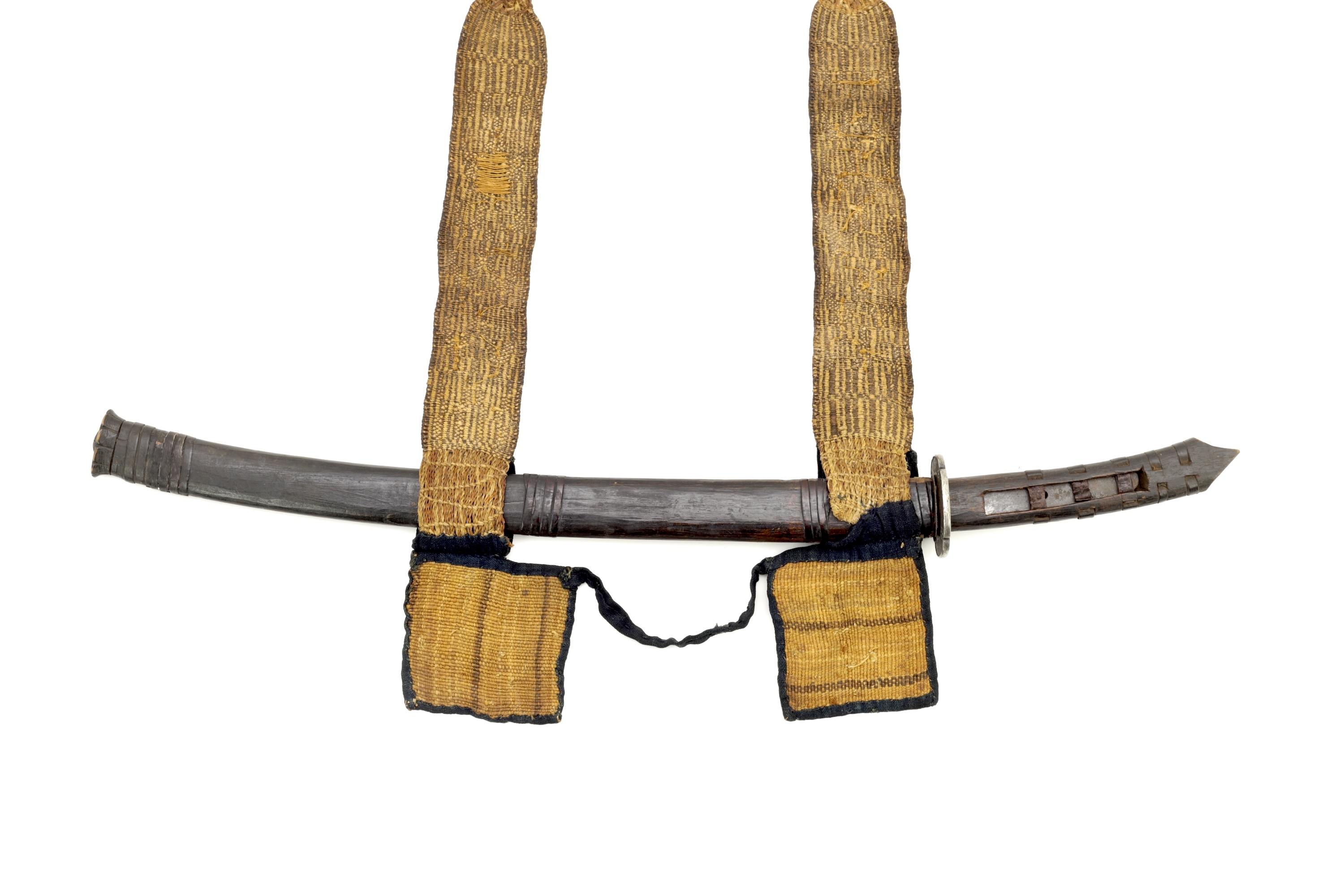 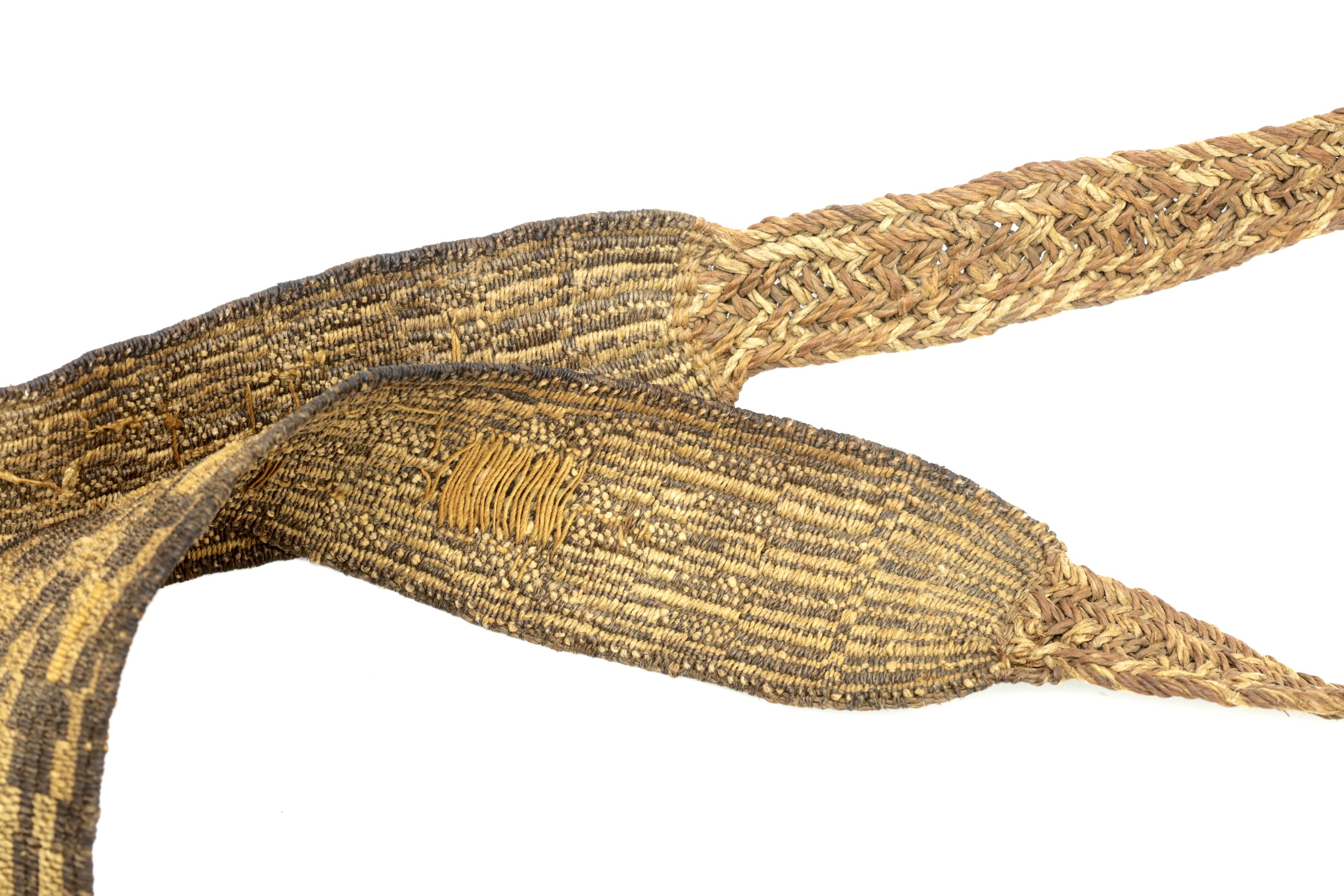 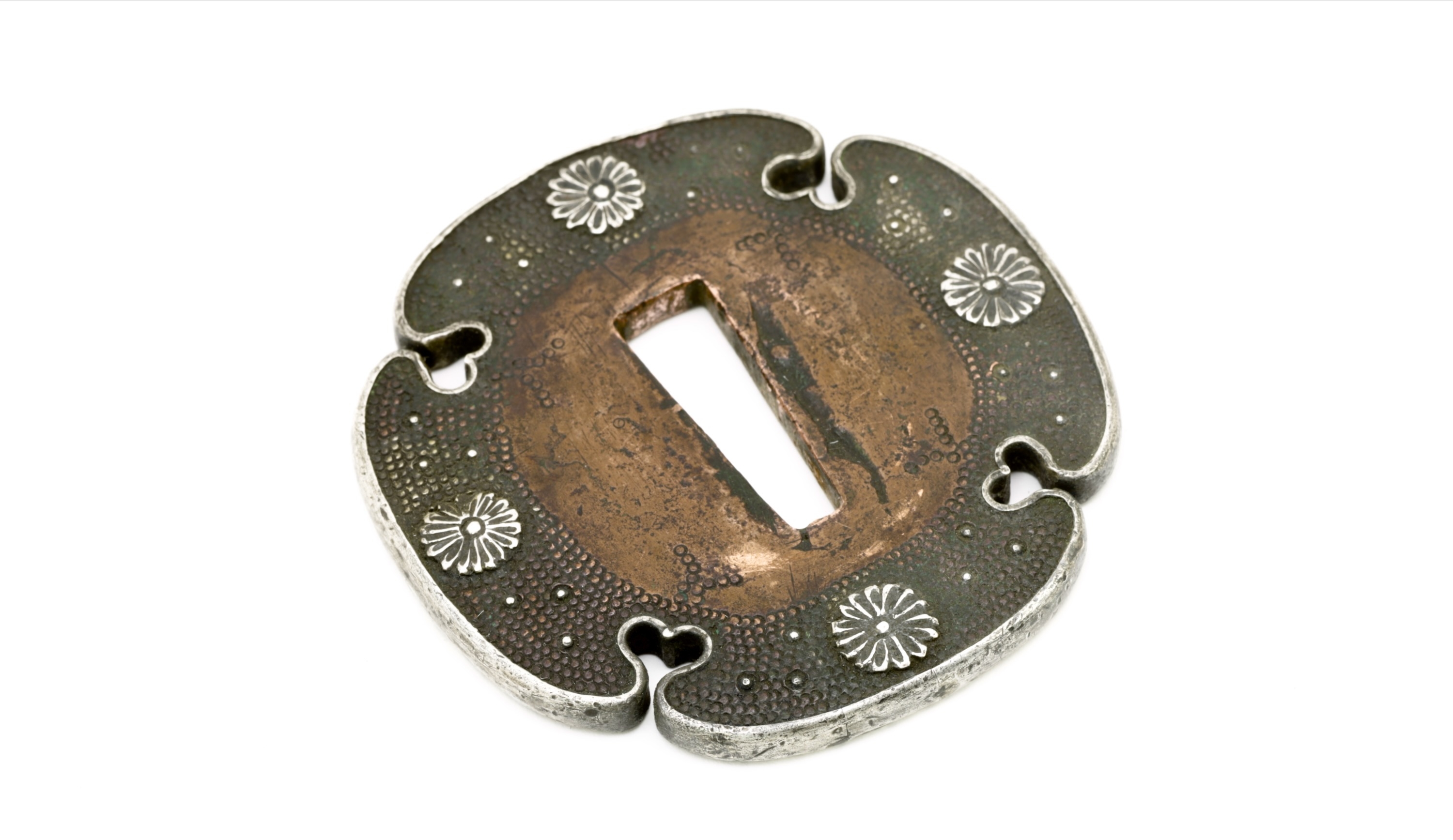 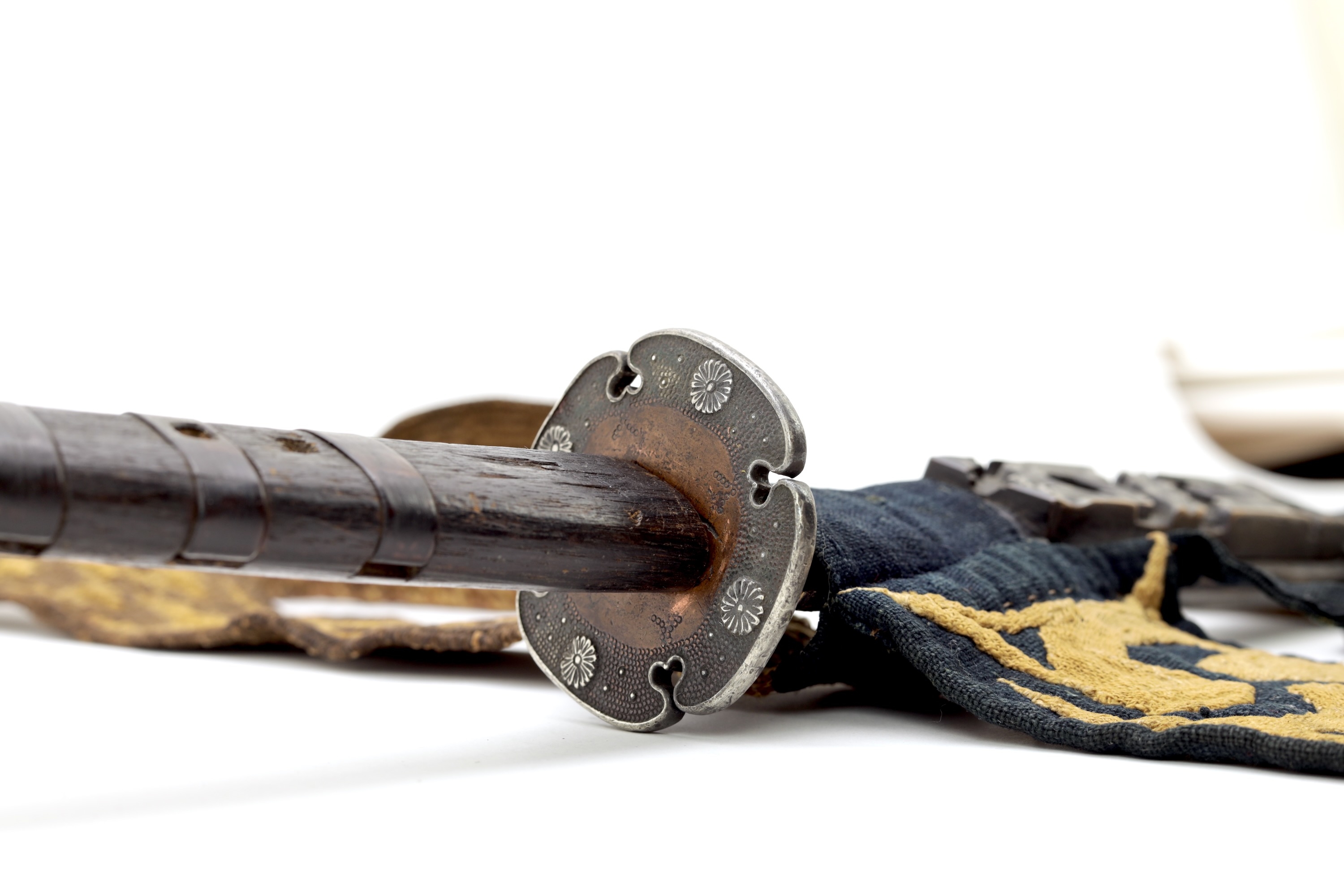 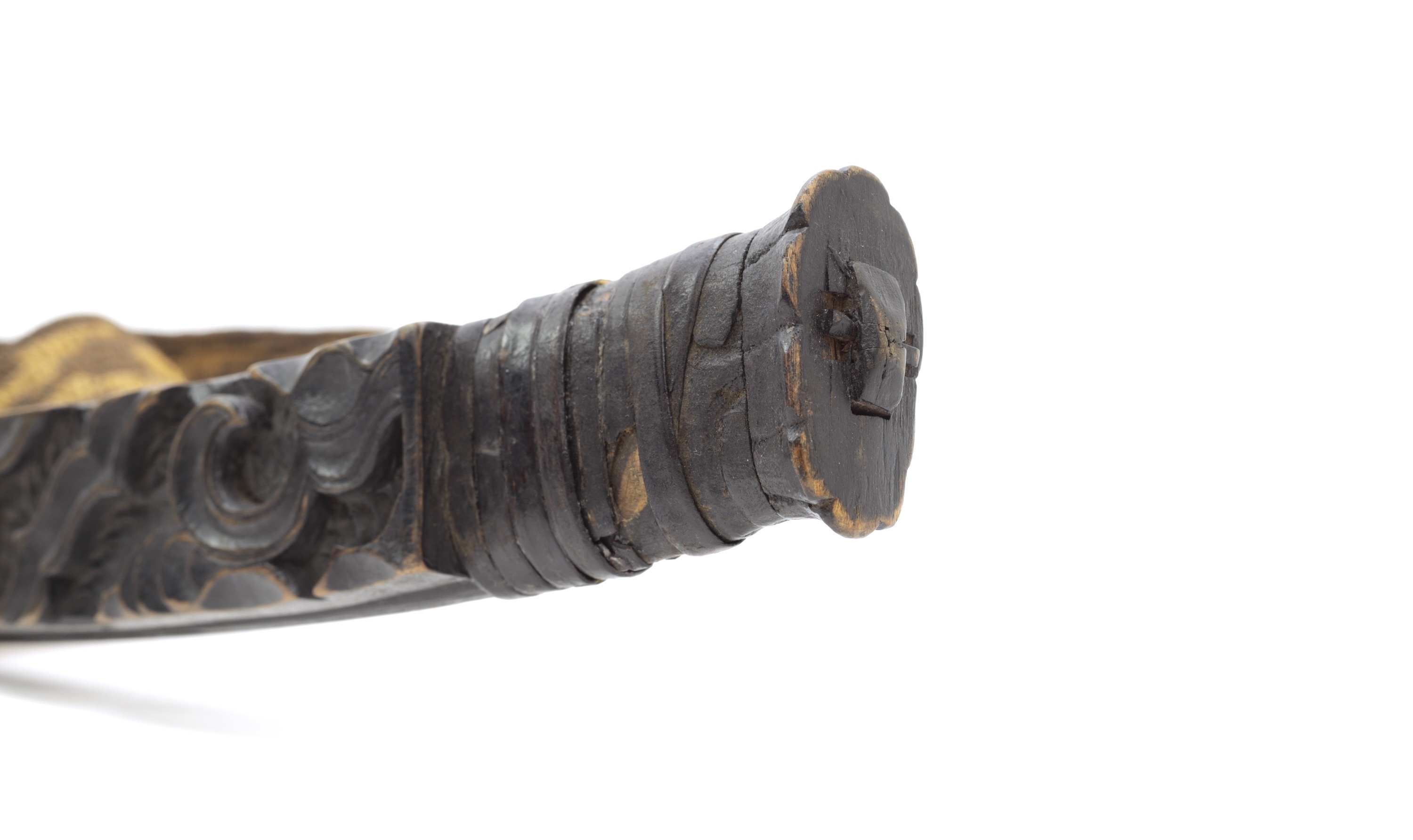